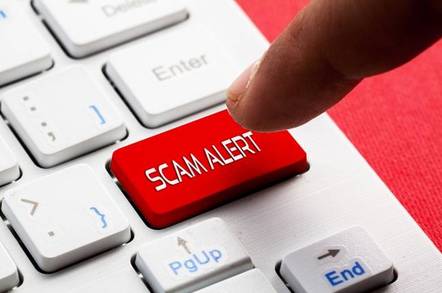 Application makers are crying foul after some of their programs distributed via the Windows Store popped open tech-support scam ads on users' desktops.

A thread in Microsoft's support forum, active since April 28, details the scandal: programmers who use Redmond's Advertising Software Development Kit (SDK) to display ads in their apps, available via the Windows Store, to generate revenue say bad banners are being forced open in their users' browsers.

According to the developers, netizens who downloaded their apps are being interrupted by their browsers opening up new tabs displaying an alarming message that wrongly claims their PC is infected or damaged, and are directed to a scammer-owned website that offers to fix the supposedly broken machine for cash. It even affects Xbox One owners who use software that employs the SDK, it is claimed.

It appears, therefore, that miscreants were, and still are, able to book rather intrusive and misleading ads with Microsoft to appear via apps using the SDK – and users have been complaining to the affected software developers. The devs, in turn, have gone to Microsoft to figure out why their applications are forcing open fraudulent adverts for scareware.

"This is very worrying given Microsoft tout store apps as being totally secure," said Reg reader Dave Wade who tipped us off to the kerfuffle. "Their support team provide a temporary work around and then suggest you open a paid for support contract."

Indeed, developers grew frustrated with Microsoft's response, or lack thereof, over the course of the thread. A number of programmers noted that users were blaming them for the unwanted pop-ups, and that their review scores and download numbers were suffering as a result of the outbreak.

"This is killing the user experience for any app which uses Microsoft's Advertising SDK," said a disgruntled coder at GameFace.LLC. "How do you expect users to trust using any app on the Microsoft Store when they keep having a browser popped open with an obvious scam site?"

El Reg asked Microsoft for comment, though Redmond was only able to return a boilerplate response via a spokesperson.

"Microsoft does not send unsolicited messages to request personal or financial information, to provide technical support to fix your computer, or to send intimidating alerts with threats to take action," the US tech giant's non-answer answer read. "If you receive an unsolicited message or see a pop-up on your computer—don’t take the risk—just close your browser."

In the meantime, users and developers alike remain in the dark and frustrated over the continued barrage of nuisance ads. Avoid Redmond's Advertising SDK, it seems. ®