What's in store for Microsoft's US pop-up shops? Not much, they're being closed 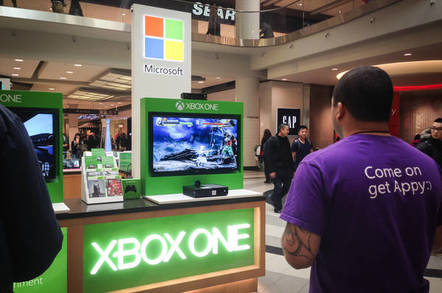 Microsoft has quietly swung the axe on a chunk of its retail operation, with "speciality stores" in America bearing the brunt of the blade.

All 17 of Microsoft's kiosk-sized stores were removed from the company's website over the weekend, leaving some of the US states that had at least enjoyed a stub of retail presence from the Windows giant bereft of the limited line-up of stock available at the outlets.

And, more importantly, somewhere to take their Surfaces to when the things break down.

Disgruntled employees have taken to the usual social media outlets, with one posting on Reddit: "We had no notice beforehand by the way. They told us that on Sunday morning, we had a mandatory meeting Sunday night then told us we were all terminated. It's horrible to be treated that poorly after years of work."

The Register attempted to contact the former Microsoft kiosk worker but have yet to hear back. Microsoft sent in the following statement:

After careful discussion and evaluation, we’ve made the decision to close our specialty store locations. We are focused on delivering great experiences throughout the customer journey. We will continue to connect with and empower our customers to achieve more and discover all that’s possible with Microsoft through Microsoft Store across the globe online and in our physical stores in the U.S., Canada, Puerto Rico, Australia, and coming soon to the U.K. We look forward to continuing to showcase a robust lineup of products and services at our full line and flagship stores, providing the space and support for us to deliver experiences that our customers are excited about.

It was all so exciting back in the day, as Microsoft saw the pop-up stores as a way to introduce customers to its wares without having to pay for a full-size outlet. Instead, the smaller storefronts could be staffed by fewer people, selling a "curated selection of services and products."

Alas, things did not always go entirely to plan, with at least one employee left so disgruntled by pay and conditions that she lobbed a sueball Redmond's way.

The numbers of these stores have fluctuated over the years, with some leading to a full size Microsoft emporium while others closed. However, the wholesale axing of the entire operation indicates a refocusing of efforts on the remaining fleet of full-sized stores, including the flagships in New York City and Australia.

And, of course, London.

The Great Vanishing of the kiosks came a day or so after Microsoft trumpeted the July arrival of its Oxford Circus retail orifice.

By our reckoning, the cull leaves the US with just over 70 stores, 200 less than arch rival Apple. Still, at least Microsoft's store in Frisco has outlived that of its fruity competitor as Apple shuttered its outlet in an unusual move for the firm. ®