Microsoft Bing is 10: That thing you accidentally use to search for Chrome? Still alive and kicking

Used in 34% of American searches. Really 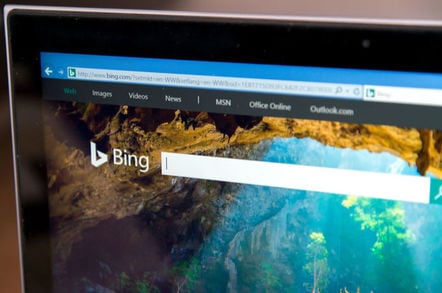 Microsoft's don't-mention-the-G-word search engine, Bing, has just the candles blown out on its 10th birthday cake.

Sadly, according to NetMarketShare, at the time of writing, that "10" might just as well apply to Bing's share of the desktop search market, squeezing into second place with 9.84 per cent ahead of Baidu's 9.53 per cent, but a long long way behind Google and its 75.48 per cent share.

Best not mention mobile search, where Bing barely registers. After all, Microsoft is in the process of digging a deep hole into which to bury its most recent crack at a mobile OS.

Backed with a bulging ad budget, the Bing service launched back in 2009 with the hope of persuading people to adopt yet another verb and "Bing it" rather then "Google it".

Aside from some slightly toe-curling product placements over the years, its attempts at dictionary-jostling haven't been altogether successful. Then again, one rarely "Dysons" a carpet, something that doesn't seem to worry the suction-botherer one jot.

Bing itself was a replacement for Windows Live Search and was unveiled by then CEO Steve Ballmer on 28 May 2009 with Yahoo! jumping on board in July of that year to have its search powered by Ballmer's baby.

The Microsoft team has spent the years fiddling with the search engine in an effort to speed things up and make the results more relevant in order to tempt users away from the Google behemoth.

It struck a blow in 2014, as Apple swapped out the Chocolate Factory's wares in favour of something a little more Redmondian but fortunes were reversed a mere three years later as the fruity outfit swapped back, ostensibly to ensure "a consistent web search experience".

Even paying users to search with the thing, in the form of Microsoft Rewards, hasn't made much of a dent in Google's global search dominance.

Still, at least there was China. Until there wasn't. While rival Google was inaccessible in the People's Republic, Microsoft had dodged the censorious leanings of the authorities by engaging with the Chinese government until, earlier this year, Bing achieved parity with Google by being, er, blocked.

The blockage was later cleared, but a glance at the statistics shows that Bing still lags behind the local services in terms of usage.

However, while its numbers are dwarfed by Google's ad-powered search revenues, Microsoft reported a healthy $7bn in search advertising revenues for the year ended 30 June 2018, up from $6.2bn the previous year and, according to the company, "driven by growth in Bing".

Microsoft has also poured investment into adding AI smarts to the search engine, investing in machine learning and neural networks in order to guess just what the user was trying to find.

Also, while the world as a whole may have shunned Bing to a certain extent, in the US Bing accounts (PDF) for a stonking 34 per cent of the market (as of 2018) with 6 billion monthly searches. Around 19 per cent of UK searches are performed using Bing (405 million monthly).

It is, of course, worth remembering that those figures are from the Bing team and include Yahoo! searches.

So, while Microsoft's search engine continues to trail that of arch-rival Google, there are unlikely to be too many tears around the birthday cake in Redmond. But a glance at the key Asia Pacific market means there probably won't be too many champagne corks popping either. ®