Astro-amateurs catch raging storm in a moment of shedding 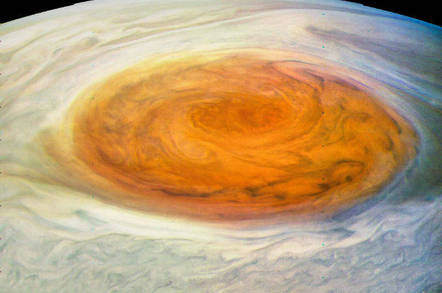 Updated The storm that has been raging on Jupiter for the last 400 years or so could be coming to an end earlier than expected, judging by observations from some in the amateur astronomer community.

The backyard boffins have spotted some very unusual activity around the gas giant's Great Red Spot (GRS) over recent weeks, and seen edges of the storm seem to splinter off and dissipate into Jupiter's clouds. By the end of last week, some observers reckoned the GRS had shrunk by 5-10 per cent in less than a month. Others put the decline as much as 15 per cent.

I've been imaging and mapping Great Red Spot dramas over the past week. After shedding some giant bands of red material, likely due to interactions with smaller vortices, it's maybe about 5-10% smaller. Another event is brewing too! #Jupiter #junocam #greatredspot pic.twitter.com/jvk9Wjw5Yo

Back in 2018, NASA scientists observed that "the next five to 10 years could be very interesting from a dynamical point of view" for Jupiter's GRS in a paper that reckoned the storm was getting slightly taller as it shrunk.

The GRS has been shrinking for the last 150 years or so, with an occasional growth in size to buck the declining trend. There have been continuous observations since 1878 thanks to keen observers keeping an eye on the storm with the aid of telescopes fitted with an eyepiece scored with crosshairs.

The Voyager missions gave scientists their first close-up view of the GRS, with observations from the likes of the Hubble Space Telescope supplementing Earth-based astronomy over the years.

The storm had a growth spurt in the 1920s but last year scientists observed it was "quite small now, and it's been a long time since it last grew". However, rather than the winds speeding up as the storm contracts, as researchers expected, the spot has actually stretched upwards.

The colour has also become a more intense shade of orange, possibly as a result of the chemicals that give the storm its hue being carried higher into the atmosphere.

The GRS is currently about the size of Earth – a few decades ago it could have taken the planet three times over. But now it appears the storm is unravelling far faster than expected.

Speaking to CBC, Glenn Orton, a senior research scientist at NASA's Jet Propulsion Laboratory, said: "This is very uncharted territory," before paying tribute to the amateurs that keep their telescopes trained on the giant.

NASA's Jupiter orbiter, Juno, is due to swing past the GRS in July and take some detailed snaps of the phenomenon. Orton's take was gloomy: "I hope it's still here." He added: "Nothing lasts forever."

Judging by Go's latest observations, there should still be a show for Juno. In a recent post, the astronomer noted: "More flake material is coming out on the SE of the GRS," but "red material is again forming on the west side of the GRS." ®

Dr Garry Hunt (he of the Voyager project) got in touch to tell us that it was highly unlikely the storm, which was three times the size of earth when Voyager's cameras snapped the thing, would fully disappear any time soon.

Hunt explained that without Earth-style atmospherics and friction to act on the vortices, things would roll on for a while yet even as the GRS shrank. Dr Hunt was also particularly keen to pay tribute to the amateurs responsible for capturing and processing the images of the gas giant, describing the current debate over the GRS as "very exciting".