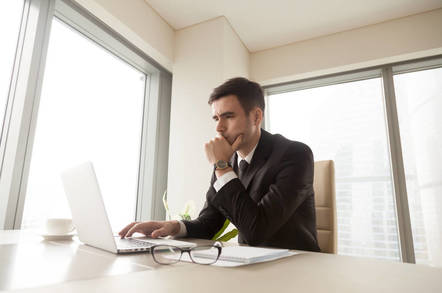 With the Windows 7 refresh cycles forecast to run and run, Intel's protracted CPU shortage is sending conservative corporate enterprise buyers into the arms of AMD – or so says HP Inc's CEO.

He told Bernstein IT Hardware researcher Toni Sacconaghi that HP was was having some success promoting AMD to suited customers – you know the types, those who historically never got fired for buying IBM.

"It's hard to change commercial behaviour because for the longest time Intel has done an incredible job in the commercial space of selling the value proposition of Intel. And in many cases, it may be a superior product," Weisler said.

"Commercial customers have made a decision. In times of extended shortage, a customer then has to choose between 'Do I have nothing or do I give this a try?' And when they give it a try and that's a good experience, barriers have been broken."

Intel has failed to match supply with demand since August: it was caught out by the delays of shifting production to 10nm and high orders from cloud providers that are beefing up their infrastructure.

Availability was supposed to have improved at the end of this month, according to Intel CEO Bob Swann, but things haven't gone according to plan: it looks like Q3 at the earliest before it all picks up.

Weisler said it is easier to convince consumers to buy a PC with AMD inside.

"It's not impossible to convert commercial customers, it's a lot easier during times of shortage," he said. "When they convert they become a big part of your mix."

According to Mercury Research, in Q1 AMD gained 1.3 per cent market share year-on-year for desktop to 17.1 per cent and grew 1 per cent in notebooks to 13.1 per cent. The stats do not identify lines of business.

Mikako Kitigawa, senior principal analyst at Gartner, said she had also heard that CPU shortages had been "impacting refresh cycles of corporate customers".

"We have also heard that corporations started considering AMD-based PCs," she told The Reg. "Even if these companies are not impacted by the shortage this time, some of them started preparing for plan B for future events like this because it is too risky to rely on a single vendor."

Weisler said he expects the Windows 7 refresh buying pattern to continue well into next year. He estimated that about a fifth of the installed based has yet to replace ageing stocks. ®