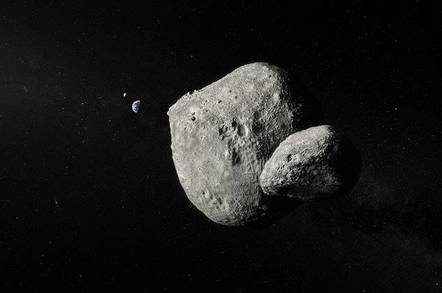 Asteroid 1999 KW4 heading toward Earth to destroy every one of us (Dramatization, may not have happened)

A pair of asteroids just whizzed past Earth at 70,000 KPH (43,496 MPH), and although the flyby presented no danger to our home world, we can learn from the close encounter to potentially thwart any future menaces from the cosmos.

The ground-based European Southern Observatory (ESO) was used to clock the asteroid duo, dubbed 1999 KW4: the pair came as close as 5.2 million kilometres (3.2 million miles) to our planet on May 25. The rocks were spotted and tracked by the International Asteroid Warning Network (IAWN), a group of organisations dedicated to detecting and following near-Earth objects (NEO).

Specifically, ESO astronomers directed their Very Large Telescope at the space rocks, and snapped images of them as they grew closer. 1999 KW4 is a binary asteroid system: its main body stretches 1.3 kilometres (0.81 miles) across, and it is orbited by a smaller companion that is a mere 360 metres (394 yards) wide.

The pictures will allow the astronomers to check whether both the space rocks are composed of the same materials and how they interact with each other. “This data, combined with all those that are obtained on other telescopes through the IAWN campaign, will be essential for evaluating effective deflection strategies in the event that an asteroid was found to be on a collision course with Earth,” said Olivier Hainaut, an ESO astronomer, on Monday this week.

“In the worst possible case, this knowledge is also essential to predict how an asteroid could interact with the atmosphere and Earth’s surface, allowing us to mitigate damage in the event of a collision.”

1999 KW4 proved harmless to us here on Earth, though monitoring it is good practice for another NEO that may not be so friendly: Didymos. 1999 KW4 and Didymos are surprisingly similar to one another. Didymos is also a binary asteroid system, with a larger rock measuring about 780 metres (853 yards) wide and a smaller orbiting boulder about 160 metres (175 yards) across.

Didymos orbits the Sun about once every two years, and the closest we've seen it come to Earth was 7.18 million kilometres (4.5 million miles) away in November 2003. Didymos has been given the status of “potentially hazardous asteroid” as it may come even closer to Earth – some 5.9 million kilometres – in 2123, and is of large enough size to cause significant damage if it smashes into us. Assuming, of course, humanity makes it to the 22nd century and there's anyone around who gives a crap.

In fact, Didymos is the target of NASA’s DART mission. DART stands for Double Asteroid Redirection Test, and is an experimental spacecraft that is being designed to crash into the smaller rock, or moonlet, of Didymos at 6.6 kilometres per second (4.1 MPS).

The method of deflecting asteroids like Didymos in this way is known as the kinetic impactor technique, and DART will be the first to attempt smashing into a binary asteroid. Boffins estimate the collision will alter the moonlet’s orbital speed by one per cent, enough to allow the change to be observed and measured by telescopes on Earth. The overall goal is to determine how effective something like DART is on asteroids.

Once DART is launched into space, it’ll collect enough solar energy with its solar panels to kickstart its electric propulsion system. NASA is hoping to deploy the spacecraft in July 2021. It’ll hopefully hitch a ride aboard a SpaceX Falcon 9 rocket, and will reach Didymos by September 2022.

By then, the binary asteroid will be within 11 million kilometres (6.8 million miles) from Earth, allowing eggheads to keep a watchful eye over its trajectory and the moment DART crashes into it. ®