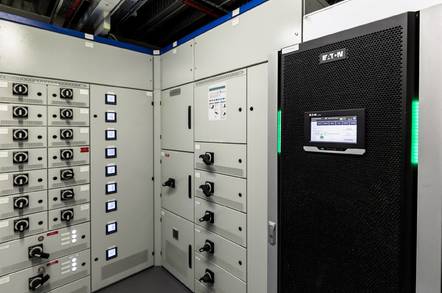 Power distribution specialist Eaton has kicked off a pilot project in Ireland that uses data centre UPS systems to help power the grid in periods of peak demand, to avoid grid-level outages.

The owners of UPS systems are compensated for the effort – being paid as much as €50,000 per year for every MW of UPS capacity they provide to the grid.

The scheme, called Energy Aware, taps into UPS batteries to regulate the frequency of the grid when there's not enough electricity to go around, preventing brownouts and blackouts – and Eaton claims it can do this without interfering with the primary UPS function of protecting the IT load.

UPS systems are essentially an insurance policy: they are dormant most of their life, and only activate for a few minutes in the event of a power outage. Eaton's big idea is that data centre owners and other major UPS users – like airports and hospitals – would be paid for giving part of their battery capacity, helping prevent the outages that create the need for UPS systems in the first place.

To kick off the pilot, Eaton is using the UPS in its corporate headquarters in Dublin, marking the first time this has been done in the UK and Ireland. According to industry publication DCD, the initial deployment is fairly small, with just 200kW of battery capacity.

The company previously trialled similar schemes in Sweden and Norway.

The so-called UPS-as-a-Reserve (UPSaaR) service is one of several demand response mechanisms used to regulate the grid.

Such mechanisms are especially important as more renewable energy sources are connected to our power networks. Renewables are less reliable than fuel-based power generation since their output varies depending on environmental conditions. For example, the solar panels are useless when it's cloudy, and wind turbines are only active when there's wind to spin the blades.

Among other things, Energy Aware could help cut down on the use of "peaker plants" – power plants that generally only run in periods of peak demand for electricity, and are a lot less efficient than base load power plants. In essence, UPS systems could serve as virtual power plants.

"Industry continues to struggle to make efficiency gains and to de-carbonize the energy we use. This technology turns the tables and literally means industry can give back," said Ciarán Forde, segment leader for Data Centre & IT EMEA at Eaton.

The pilot in Dublin is being conducted with Irish state-owned electric power transmission operator EirGrid, using its DS3 system services programme, and Enel X – the advanced energy services division of Italian utility Enel. Enel has lots of experience in this field, having secured more than 6GW of various flavours of demand response capacity worldwide.

Eaton is expected to report on how much money it made from the Energy Aware scheme in October 2019. ®