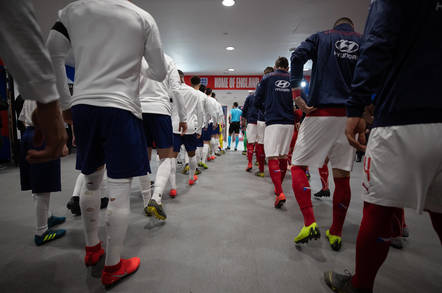 RotM The Football Association - which governs competitive football in England - has fallen prey to the rise of the player analytics machines, having thrown its lot in with Google's public cloud and associated tools.

Besides adding G Suite and Hangouts to its game plan, the FA and its national centre St George's Park said today they hoped to kick out a proprietary tool called the PPS - which reassuringly is not a Perl Port Scanner but rather a Player Profile System (PPS), collecting data on every ball-kicker across 28 national teams.

The PPS is apparently able to "measure performance, fitness, training and form" of overpaid prima donnas using a variety of data sources, from match video to GPS trackers - although we wonder when that GPS clicks off and whether the FA will be notifying the traffic authorities... or the WAGs.

Not to miss a sitter, the thing even employs machine learning (insert your Wayne Rooney joke here).

The FA was founded in 1863, making it the oldest football association in the world.

"Everything we do at St George's Park for this workload is built on Google Cloud," said Nick Sewell, head of app development at the FA.

"We have progressively built a systematic approach to developing winning England teams," added Dave Reddin, the FA's head of team strategy and performance, who perhaps forgot that the national team failed to qualify for the group stage of the FIFA World Cup just five years ago. He said that the FA is taking a punt on Google Cloud tech "to accelerate our ability to translate insight and learning into performance improvements."

Well, quite. Let's see how that works out during the inevitable penalty shoot-out at the next major tournament (England won against the Columbians in the last World Cup - Ed).

The intersection of sport and technology is strange place, since at least some of us nerds who venerate computers see physical exercise as anathema. Others among us would grab a hatful of chances to be taken into Google's dressing room, clap eyes on the tech and see if it could really give UK players, er, something to lift. We're sure you'll let us know what you think of the enterprise in the comments. ®