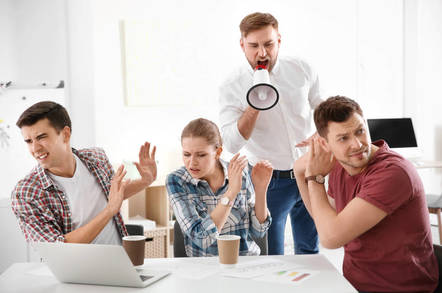 If you are fed up with shouting at a so-called smart assistant to make yourself heard, you must be one of the many Google Home customers who have lived with a less-than-stellar digital butler lately.

For nearly four months – which is how long ago the first complaint appeared on the Google Home support forum – the search-slash-ad-slash-cloud biz has failed to find a solution to growing grumbles about the AI-powered technology.

Specifically, the voice-controlled Google Home devices, when listening and talking to their masters, are supposed to helpfully lower the volume of nearby Chromecast-connected TVs. This feature, which is on by default, is supposed to make it easier to boss around the gadget, without raising your voice, while casting content to your living room telly.

Or it should do. It stopped working, seemingly after a firmware upgrade.

One owner of a pair of Google Home Mini speakers, two TVs and two Chromecast widgets reported in February the lower-the-volume-when-listening feature had stopped working on one of the Minis, forcing the punter to shout "OK, GOOGLE..." over their telly.

“Have tried resetting everything and still the same. The only difference in setup is that I am using a newer Chromecast on the TV that has stopped lowering volume,” said netizen Hew Williams.

Hundreds of others have subsequently backed up this claim.

“My Google Home started acting weird suddenly,” said another. “The TV volume doesn’t lower when talking to Google Home. Now I have to yell every time I have to talk to GOOGLE. Most of the time, it won’t even understand [you] at all… It’s so frustrating.”

Some users concurred there was a bug in the Chromecast firmware update 1.37.144496. One said he had three C’casts, two on the older 1.36 version, and when the gizmos were updated, they also stopped lowering the volume during attempts to strike up a conversation with the Google Assistant. Those who updated to 1.39 still reported problems.

Firmware borkage speculation remains unconfirmed by Google at the time of writing. We've asked the web giant for comment.

Back to February: Williams weighed in again to say the Google Home team was blaming the Chromecast team, and vice versa. “Anyway I think I have convinced them both that they need to talk to each other,” he added.

He was back again later that month to say he was “sick of being passed from product expert to another, having to repeat the whole problems over and over again and then being treated like an idiot by someone that doesn’t even understand the feature that is not working.”

Further posts were made during the remainder of February, they continued throughout March, and spilled into April. Finally, a solution was proposed by one optimist. Had anyone tried turning the hardware on and off again? Sadly, this wasn’t a fix that worked for the masses. And still no meaningful updates were delivered by the Chocolate Factory.

Someone is listening at least

Googler Rachel Chambers popped up in the forum sporadically throughout the past few months, claiming a fix was under construction, and asked for user feedback.

“We have escalated this issue further to see if we can get some more information and also if and when a fix will be available,” she said.

The if's and when’s started to grate, and patience wore thin. “Now more than four months later problem still not solved,” yelled Frank Oldemarkt. “This is really unbelievable, I want my money back!!!!! … I have to shout to my Mini to get something done.”

April became May, and no fix emerged. Chambers continued to share users' frustration “especially because of how long this has been happening with no true understanding as to why.”

Good ol’ Williams returned to fray to report that he was mulling over taking a software programming course that runs for three years.

“Once I have completed this course I should be able to write some new firmware for the Google Home Mini and fix this problem. I think this will be the fastest way to resolve the issue,” he beamed.

Following more shouty CAPPED paragraphs, threats to defect to Amazon, and worse, from customers, Chambers returned a few weeks ago to say engineers were still working on the fix. This was progress. Engineers were not mentioned in her prior posts. Details were, however, scant. And this week she provided another update:

The team is currently working on a fix and I’ll update you all once I know more. I understand this is not the information you’d like to hear at the moment, but I’ll ensure to continue sharing your feedback and once I have more intonation, updating this thread as well.

Did the advice work? Not as of today.

One reader who tipped off The Reg about the cock-up told us this sort of debacle is funny “until it happens to you.”

“This is not we were promised with devops, continuous delivery, yada yada. Not the best in class, Google,” they sniffed.