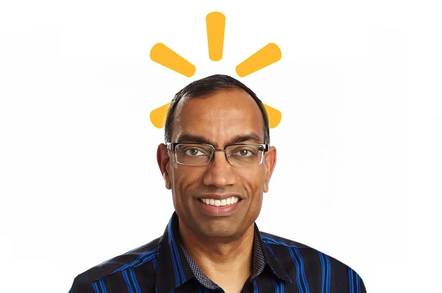 Kumar is an old hand at IT, having previously worked for Google, Microsoft and IBM, and spent 15 years in exec roles at Amazon. And of course, Jeff Bezos' behemoth competes with Walmart in the retail space with its Whole Foods and cashier-less Amazon Go stores.

The appointment comes as Walmart, like so many of its ilk, abandons its physical retail roots and attempts to reinvent itself as a robot-powered home delivery service.

Kumar has worked in everything from hardware R&D and software development to cloud computing and machine learning, and has a PhD in Engineering from Princeton University.

His most recent stint was with Google as veep and GM for the display and video ads, apps and analytics business. Before that, he spent almost four years as corporate veep for cloud infrastructure and operations at Microsoft.

But more importantly, Kumar served as vice president of technology for retail systems and services at Amazon and was leading the development of the company's supply chain and inventory management systems.

He was also responsible for setting architecture direction for all retail subsidiaries and integrating them into the Amazon technology stack.

Like Amazon or Britain's Ocado, Walmart is trying to offset the pains of traditional retail with technology: its latest distribution centre for fresh and frozen groceries, under construction in Shafter, California, will feature warehouse automaton – including robots developed by Germany's Witron. Walmart previously said it expects the centre to move products 40 per cent faster than what's possible in facilities operating with bone and sinew.

The company has also partnered with auto auto specialist Waymo to test an online grocery service in which driverless vehicles pick up customers at their homes and take them to the store to collect their orders.

Meanwhile, Walmart is trialling Spark Delivery – a service that works like Uber Eats or Deliveroo, but self-employed drivers get paid for delivering groceries instead of food.

"The technology of today and tomorrow enables us to serve our customers and associates in ways that weren’t previously possible," said Walmart CEO Doug McMillon. "We want to take full advantage of those opportunities."

Walmart claimed it has "elevated" the position of global CTO, whereas it has in fact created the role, as it did not previously exist. As the new worldwide CTO, Kumar will have a direct line to the CEO, and will oversee the retail giant's IT around the planet. The CTO of Walmart US – previously held by Jeremy King – plus the head of technology for Sam's Club, the head of technology for Walmart International, and the head of Global Business Services will all report to Kumar. ®

Editor's note: The article was updated after publication to clarify the scope of Kumar's new role and direct reports.