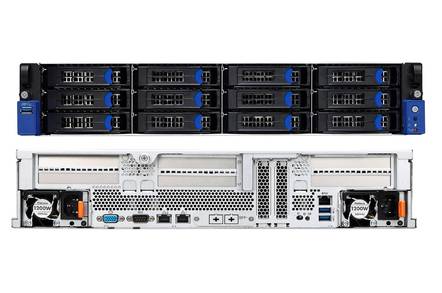 Nvidia revealed EGX earlier this week, its distributed platform for machine learning applications, based on Kubernetes. Now Taiwanese server vendor Tyan has furnished one of the first examples of the kind of hardware that will be used with EGX.

The server, called Thunder SX TN76-B7102, is a 2U dual-socket machine equipped with second-generation Xeon SP silicon, 24 DDR4 slots, 12 SATA bays and up to four Nvidia T4 GPUs, which are sold as tools for machine learning – and are also available in the public cloud from Google and AWS.

That's a lot of muscle packed into something described as an "edge" server: the core idea of EGX is it enables users to run sensor data through machine learning algorithms close to the point of origin, reducing the amount of information that needs to travel down the wire.

Seagate is already using EGX to inspect the quality of its hard disk read-and-write heads, and Foxconn has deployed the platform to scan for defects on its PC production lines.

Theoretically, this approach brings advantages in both latency and cost.

"Nvidia EGX is what we are looking for to solve the current bottleneck of cloud computing," said Danny Hsu, vice president of Tyan. "We see strong demand from the enterprise market."

Tyan is relatively unknown in the world of servers – the company has been making motherboards since 1989 but only released its first full-feature box in 2015 – as part of IBM's Open Power hardware experiment.

However, its parent company, MiTAC Computing Technology Corporation, has plenty of experience, as an original design manufacturer (ODM) that supplies some of the world’s best known computer vendors.