The good, the bad and the weird 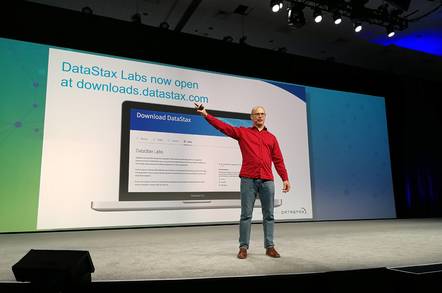 DataStax Accelerate Data management biz DataStax chose the comfy surroundings of its annual user knees-up to open its kimono on near-future plans: a Kubernetes operator, a developer-focused API generator for Constellation – its newly minted database-as-a-service – and a desktop version of its flagship software suite.

"DataStax Desktop is the easiest way to get started with DataStax Enterprise," Jonathan Ellis, co-founder and CTO, said in a keynote.

"With just a couple of clicks, you can download Docker containers – and DataStax Desktop will do that automatically. It pulls down the containers, it configures them to work together, so if you have DataStax Enterprise core, and DataStax Graph, and Developer Studio, it will configure all of those to work together seamlessly, and you don't have to touch a single line of configuration files."

DataStax was founded in 2010 to commercialise Apache Cassandra, the open-source non-relational database project originally born at Facebook. Cassandra is a hit with massive online businesses – used in production by Apple, Netflix and eBay among others. The company has to date receved $190m from two rounds of funding.

DataStax sells a supported version of Cassandra and DataStax Enterprise, an open-core product full of additional bells and whistles. In October, the company will launch Constellation, its take on DaaS, replete with an Insights dashboard that will help run database clusters across multiple cloud providers – first on GCP then AWS and Azure.

The third Constellation product – AppStax, a managed data service designed to provide users with custom APIs to store and query their data, without the need to configure or manage a database. The session at DataStax Accelerate which introduced AppStax was titled "making the database obsolete" – an unusual pitch for a company that sells databases for a living.

"What we wanted to do with AppStax is we wanted to do something similar for application development that Insights is doing for operations," Ellis said. "I think collectively as an industry, we have a relatively good handle on what best practices for operations automation looks like, we started to figure that out, and I think we have less of a collective understanding of what automating a data layer looks like for application developers."

AppStax is currently in private beta and is expected to reach general availability in early 2020.

Ellis cautioned the audience to contain their expectations regarding the upcoming Kubernetes operator for DSE: "Kubernetes is not going to be a magic wand that solves everything. It solves a lot of things, but it's not going to automatically find performance problems for you, it's not going to make operations go away entirely, it's not going to create your application data layer for you." The implication here is that DataStax will take care of all these things through Constellation.

A version of the DSE Graph database and DataStax Desktop are available immediately through a new beta-testing initiative called DataStax Labs – tempting with a promise of "non-supported previews of enhancements that may or may not be included in future DataStax production software". ®