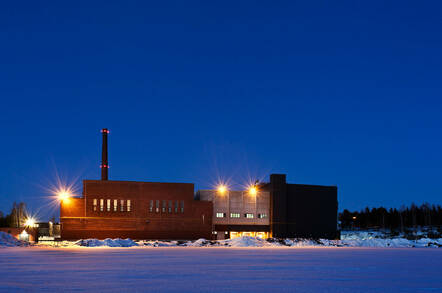 Pre-eminent data-slurper Google has said it will spend €600m (£529m) to expand its data centre footprint in Hamina, on the frozen shores of the Gulf of Finland.

The project will bring Google's total investment in the small Finnish town of just about 20,000 residents to an eye-watering €1.4bn.

"This is the largest ever single investment in Hamina's history and it will have a positive effect on employment during the construction phase and after," Hannu Muhonen, municipal head of the town, told local publication Yle. "For over a decade, cooperation between Google and the City of Hamina has worked very well."

Google opened its first data centre in Finland in 2011, taking over the disused Summa paper mill previously owned by Stora Enso and converting it into a bit barn cooled by seawater – calling it the first system of its kind in the world.

The campus gets most of the power it needs via local wind farms, and last year Google signed renewable energy contracts with three Finnish wind farm operators, having a combined capacity of 190MW.

Overall, 100 per cent of energy consumed by Google – powering both its digital infrastructure and its corporate offices – is purchased as renewable energy, either directly from suppliers or through Power Purchase Agreements (PPAs), market tools created to fund renewable energy production when there is no solar or wind capacity in the immediate vicinity.

Finland presents an attractive location for bit barn builders, not only because it's cold, but also due to political stability, access to an educated workforce and cheap, stable power. If data centres are the flesh of the digital economy, electricity is its lifeblood – and the country enjoys some of the lowest data centre electricity prices in Europe, following the adoption of relevant tax breaks for facilities over 5MW in 2014.

Despite being present in Finland for more than a decade, Google only opened its cloud services region in the country in June 2018 – the Hamina facility was previously dedicated to products like search, advertising and Google Apps.

Google runs its European data centres in the Netherlands, Ireland and Belgium, with another €600m hyperscale site currently under construction just outside Fredericia in Denmark. The location was announced at the end of 2018 and the construction work is expected to run through 2021. The data centre in Hamina will likely follow a similar schedule. ®