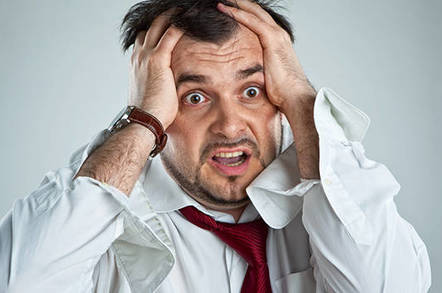 Who, me? Three cheers for Monday! No? Just us? Well, take your mind off the start of the working week with The Register's dose of schadenfreude in the form of our regular Who, Me? Feature.

Today's story of unplanned oopsies comes from "Robin", who spent the end of the last century working for a nameless institution in continental Europe.

Although the outfit Robin worked for was not based in Blighty, it insisted on English as its "lingua franca" and so to that end ran pretty much everything in "US-English".

Exclusive: Windows for Workgroups terror the Tartan Bandit confesses all to The Register

As Robin explained to The Register: "We ordered everything, from keyboards to OS's in the 'US-English' flavor."

One day IT companies will stop referring to their take on technology as their particular "flavour" – it's getting a bit icky.

Back to Robin. One of his tasks was to set things up. In those far-off days, provisioning hardware involved a tired-looking member of IT pressing buttons and inserting CDs to make devices work prior to triumphant delivery to staff. Robin's workplace was no exception. "At that time there was a desk in our large computer room where we did initial setup of various devices including printers."

Significantly, "the place was a bit noisy but bearable."

On the day in question, Robin had received a brand spanking new HP LaserJet and, having cast aside copious amounts of packaging, plugged it in to get cracking with configuration.

However, at that moment, Robin's colleagues announced that it was time for lunch. As Robin observed: "Lunchtime is something taken seriously around here."

Far be it from us to reinforce the odd national stereotype or two.

Returning refreshed from his repast, Robin arrived to find the computer room in uproar. Staff were gingerly starting servers one by one after a third of the machines had powered down following a blown fuse. The affected servers handled tasks like network storage and email. All the minor things.

The cause was a mystery, until Robin took a look at the printer he had cheerfully plugged in. It appeared the US-English policy had been extended to printers and the HP was "truly, totally US: 110v instead of 220v"

After Robin plugged it in, the computer room's power supply tripped and a third of the servers fell over.

"Because of the noise I didn't hear the servers going down."

And lunch was, of course, was a far louder call.

Ever unwittingly hacked off one of your employer's electronic limbs, popped out for lunch, and returned to find your co-workers frantically applying the digital tourniquet?

Of course you have. And you should cleanse your conscience with Who, Me? ®