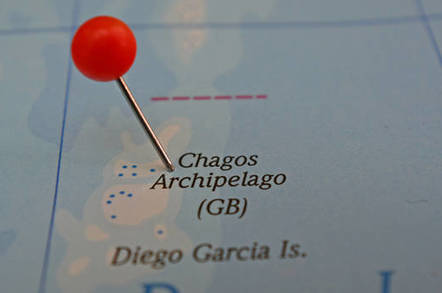 Special report The future of internet addresses ending in '.io' – popular with tech startups – may be in doubt after the United Nations condemned the UK's continued ownership over islands in the middle of the Indian Ocean that own the domain.

This week, the UN's general assembly voted overwhelmingly 116-6 to condemn the UK's occupation of the Chagos Islands. The non-binding resolution endorsed a decision by the International Court of Justice (ICJ) in February that said the UK continued claim was illegal and the islands should be returned to the former British territory of Mauritius.

The islands are part of the British Indian Ocean Territory, are recognized as a sovereign territory, and as such have their own two-letter acronym – yep '.io' – and as a result have their own internet registry.

That registry has become increasingly popular with tech startups thanks to the "input/output" computer shorthand of "I/O" but the continued administration of the registry is uncertain, especially if the UK does what the international community has clearly indicated it feels it should and returns the islands.

The registry is run by a company run out of London called Internet Computer Bureau (ICB), which also runs the registries for two other historically British territories: .sh and .ac, which are the country-code top-level domains (ccTLD) for Saint Helena, Ascension and Tristan da Cunha.

ICB was given a perpetual license to run the registries by the UK government when the domain was added to the internet in the 1990s. Its chief Paul Kane said in 2014 that a certain percentage of any profits are returned to the UK government's bank account for that specific territory.

"Each of the overseas territories have an account and the funds are deposited there because obviously the territories have expenses that they incur and it’s offsetting that," Kane explained – although that admission prompted questions in the UK Parliament and the UK government officially denied receiving any revenues.

Bring out the Warsi!

Senior minister of state for foreign and Commonwealth affairs, Baroness Warsi, said: "In much the same way as the .uk domain, the administration of the .io domain has always been carried out by a private sector organisation – this is currently the Internet Computer Bureau. As with the .uk domain, the Government receives no revenues from the sales or administration of this domain, and there are therefore no plans to share these with Chagossians."

Which is important because it gets to the heart of the issue over control of the Chagos Islands and an ugly piece of British history.

The Chagos Islands were home to the Chagossians for over 150 years and were part of Mauritius. But in 1965, the UK decided to break them away from Mauritius while that country went down the path to independence – something that occurred in 1968. The UK paid the self-governing colony of Mauritius £3m for the islands.

Why did the UK go to the trouble? Because by sitting smack-bang in the middle of the Indian Ocean and within easy distance of the Middle East, the islands represent a hugely value strategic location. And in December 1966, the UK signed a 50-year agreement with the US to allow the American armed forces to use any island for defense.

The US wanted to build a giant military based on Diego Garcia and wanted the island cleared of any inhabitants and so the UK started evicting the Chagossians in 1967, moving them to other islands or transporting them to Mauritius and the Seychelles if they requested.

But five years later, the UK decided it wanted to clear everybody out of the islands altogether and so closed all plantations on the rest of the Chagos Islands and deported the inhabitants. The Mauritian government refused to accept them without payment and so in 1972, the UK paid it £650,000 to resettle the islanders. But the money didn't go far and the Chagossians found themselves living in appalling conditions. Roughly 1,500 islanders were forcibly relocated.

And it is that injustice that has continued to reverberate through the decades, not helped by the fact that a diplomatic cable concerning the enforced move was condescending, misogynistic and racist, even by 1960s standards.

A summary of a meeting between the UK and US diplomatic was sent to the Under-Secretary of State for Foreign Affairs, Denis Greenhill which read: "We must surely be very tough about this. The object of the exercise was to get some rocks which will remain ours: there will be no indigenous population except seagulls who have not yet got a Committee (the Status of Women Committee does not cover the rights of Birds.)"

And Greenhill responded, writing by hand: "Unfortunately along with the Birds go some few Tarzans or Men Fridays whose origins are obscure…" Needless to say, the Chagossians – who have been prevented from returning to their islands – were not excited about having been forced off their land and referred to as "Tarzans."

One month before the 50-year agreement was due to expire, in November 2016, the UK Foreign Office reaffirmed that they would not allow any resettlement of the islands, sparking the prime minister of Mauritius to push for his country's sovereignty over the islands to be asserted. That kicked off an effort by the UK authorities to get India to intervene in favor of the UK by pressuring Mauritius to back down: India refused to do so.

In June 2017, the UN voted to refer the issue to the International Court of Justice (ICJ) to decide on its legal status and in February 2019 it decided that the 1965 separation was not legal and the UK should return the islands to Mauritius. The British government said the court had no jurisdiction to decide the issue.

And that led to this week's embarrassing vote in the UN where 116 nations approved a motion that sets a six-month deadline for the UK to withdraw from the islands. Six voted against (the UK, US, Australia, Hungary, Israel and the Maldives) and 56 states abstained.

Next page: So, what now?
Page:
Tips and corrections
135 Comments