At 13,620 kilograms, it's the heaviest payload yet for the Elon Musk-run biz 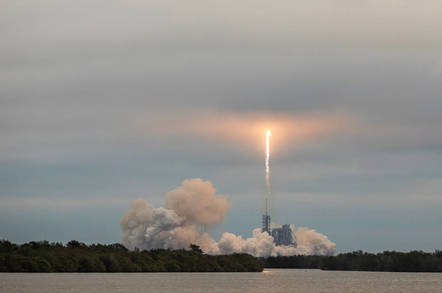 Hopefully, the launch will be successful this time round. The first attempt on May 15 was thwarted by “excess upper level winds”. The second attempt, a day later on May 16, was postponed so engineers could “update software and triple-check everything again”.

Now, SpaceX will have another crack at it. It’s expected to blast a Falcon 9 projectile from the Cape Canaveral Air Force Station, Florida, from 2030 ET, 1930 PT, or 0230 UTC onwards.

The flight is part of SpaceX’s mission of establishing a massive network of thousands of satellites to beam low-latency, high-bandwidth broadband down to us Earthlings. Before then, however, 60 of these Starlink satellites will have to do.

CEO Elon Musk tweeted a picture of a Falcon 9 packed with stacks of the satellite organised in neat rows. There’s little room in the rocket compared to the time Musk booted red Tesla Roadster off into space for the Falcon Heavy test flight in 2018. Tonight’s launch will be the heaviest SpaceX payload to date as it lugs 13,620 kilograms worth of equipment.

Each Starlink satellite weighs 227kg (500lbs) and has a single solar panel. They’re each equipped with a navigation system so they can steer themselves away from potential collisions. Before they can be deployed, however, the Falcon 9 rocket will fly to 440 kilometers (273 miles) above ground, into low-Earth orbit, and the satellites will go a further 110 kilometers (68 miles) with their Hall-effect thrusters powered by krypton propellant.

The first stage of the rocket will be recovered by the “Of Course I Still Love You” droneship stationed out in the Atlantic Ocean, if all goes to plan. SpaceX has also skirted the problem of littering Earth’s orbit with space junk as 95 per cent of the components on each satellite will burn up in Earth’s atmosphere at the end of its lifecycle.

“This mission will push the operational capabilities of the satellites to the limit. SpaceX expects to encounter issues along the way, but our learnings here are key to developing an affordable and reliable broadband service in the future,” SpaceX said. ®

Turns out third time was a charm.