Employees kicking down the doors? Happens all the time, guv 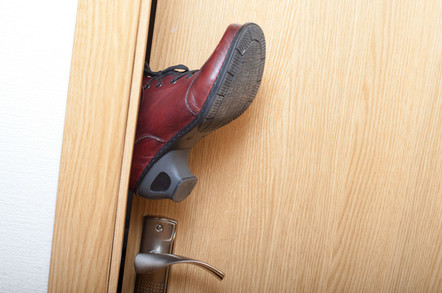 On Call It's Friday! And Friday means beer, bacon and basking in the glow of another's misfortune thanks to The Register's regular On Call column.

Today's all-too-believable tale comes courtesy of "Nell", who was working as a network engineer in South Africa for a multinational computer company back in the 1990s.

Nell and her team received a call to receive the mother of all bollockings. Somebody had gained unauthorised access to the computer room. Worse, that someone was an auditor.

The dedicated team of IT professionals soon pieced together what had happened, as Nell explained: "The company insisted that our IT systems were audited to their required standards so sent two of their people from Europe. One of the areas audited was physical security of the computer room."

Recalling the glory days of mainframes, Nell's computer room was vast and occupied most of the top floor of the building. The auditors were keen to take a look, but found their key cards didn't open the door.

With the security guards watching on the monitors from the ground floor, the duo remained undeterred. They then, as Nell explained, "tried pushing the door and found a slight give".

Demonstrating the superhuman strength that can only be achieved from a lifetime of dotting i's and crossing t's, the auditors continued their efforts. "They then tried banging on the doors and eventually using enough force rocked the doors until the locks broke and gained access."

Having done a number on the doors, the auditors then stormed downstairs to confront the guards and ask "why they hadn't done anything", like checked what was happening and call someone, or come up to the floor to investigate?

Impressively laid back (or, as Nell put it, "incredibly lazy"), the guards responded "that as they [the auditors] were employees maybe they had lost their access badges and needed to get in".

No badge? Kick in the door. Eminently reasonable, as we're sure you'll agree.

Needless to say the entire local IT team was called in for what Nell delicately referred to as "the roasting over the coals" over the "lack of secure access to the computer room".

However, as Nell wryly noted: "Good job the auditors didn't know that you could just jump over the print reception counter as there was no door between it and the computer room.

Ever found yourself called into an audit to explain a missed dot from an i or why a door needed a good shoeing? Yes? Tell On Call all about it. ®