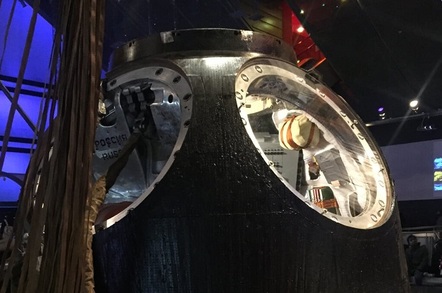 Having spent the last 20 months being lugged around the UK, the Soyuz capsule used to ferry British Astronaut Tim Peake safely back to Earth is returning to London's Science Museum.

The capsule has enjoyed an eight-stop tour of the UK, popping up in locations as diverse as the National Railway Museum in York, Peterborough Cathedral and the Ulster Transport Museum Belfast, as well as visiting locations in Scotland and Ireland. All in all, the organisers reckon the attraction clocked up 1.3 million visits.

Peake traveled to the International Space Station (ISS) on 15 December 2015 aboard Soyuz TMA-19M and accompanied by NASA's Tim Kopra and Russia’s Yuri Malenchenko. The gang, expedition 46/47, spent more than six months in orbit and returned safely to Kazakhstan on 18 June 2016.

During his time on the ISS, Peake participated in a spacewalk to replace a failed ISS component, ran a marathon from the ISS treadmill and enjoyed a bacon sandwich.

The vehicle providing Peake's ride home was acquired by the Science Museum Group at the end of 2016 and put on display the following year before embarking on its jaunt around the UK.

While not as diverse as the impressive Cosmonauts exhibition that preceded it, the 1.5 tonne capsule was an arresting sight when this Vulture paid it a visit, with parachute rigging strung from the ceiling and the interior of the tiny module illuminated.

With the Apollo 10 capsule a short trek down the hall, it was difficult not to make comparisons between the spacecraft, both of which enjoy heritage from the 1960s. These days only the Russian take on crewed spaceflight is still transporting crews to orbit.

Accompanying the capsule on its tour was a bus containing Samsung's Gear VR goggles and the Science Museum Group's Space Descent VR. This hack had a go on the predecessor, the Tim Peake VR experience back in 2017 and while the opening fly-around of the ISS was impressive, despite the aging Samsung technology, the descent portion, strapped into a virtual Soyuz simply felt a bit claustrophobic. And, of course, interactivity was at a minimum.

However, by all accounts, the experience proved a success with the target student audience.

When Peake's Soyuz returns to the Science Museum, it will be accompanied by a spanking new Space Descent VR lounge which, with the help of kind old Samsung, has been buffed up "to enhance this world class VR experience for visitors in the capital."

Naturally, we'll take it for a spin once it opens and report back. Whatever happens, it'll mean there will be two flown capsules to gawp at at London's Science Museum – a splendid day out for any committed space nerd for sure. ®