50 years ago: Apollo 10 takes an unplanned spin above the lunar surface – and sh!t gets sweary

Putting the 'blue' in blue moon 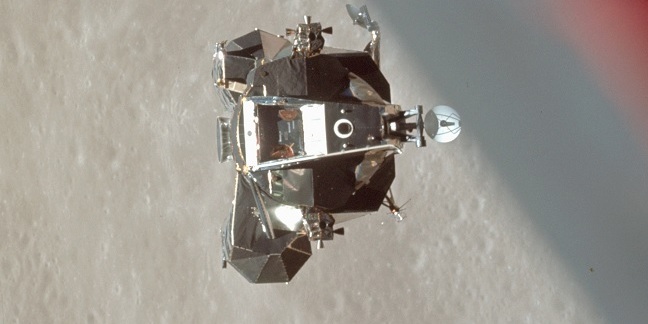 Part two As you sup your evening pint or enjoy some lunchtime refreshment, depending on your timezone, cast your mind back 50 years to when Apollo 10 did the "everything" part of "everything but land" and nearly ended NASA's lunar ambitions for good.

It's 50 years to the day since Apollo 10 blasted off: America's lunar landing 'dress rehearsal'

The cruise to the Moon had been uneventful and at the 95-hour mark, with the lunar orbit circularised, Commander Tom Stafford and Lunar Module Pilot Eugene Cernan popped the hatch to the docked Lunar Module, ready to switch the thing on prior to their jaunt to the near-surface.

The NASA Mission Report (PDF) for the crew's adventure noted that the Lunar Module (LM), Snoopy, needed a repressurisation of 1.5 psi to equalise things before the crew could open the hatch and stash the probe in the Command Module (CM), Charlie Brown.

In his book The Last Man on the Moon, Cernan noted that NASA PR staff who felt that Gumdrop and Spider weren't serious enough names for the historic Apollo 9 mission "were even more underwhelmed" when the Apollo 10 crew selected characters from the beloved Peanuts comic strip created by Charles Schultz.

It could have been worse.

Upon opening the hatch, Cernan was greeted with particles of insulation that had blown into the LM's cabin during repressurisation. Not a hazard, reckoned NASA. The crew also noted that the LM had moved 3.5 degrees out of line with the CM, raising fears that the latching pins might shear off and render redocking impossible. Again, Mission Control was reassuring: as long as the misalignment remained less than six degrees, all was gravy.

The crew was right to be a little jumpy. Shortly before the mission, Cernan enjoyed a chat with Dick Iverson, the VP at Teledyne-Ryan responsible for the design of the radar that would look for the lunar landing site. The plan was for the radar to start scanning when the LM was oriented to the Moon at a certain angle and altitude. Alas, as Cernan and Iverson discussed the numbers, an unpleasant discovery was made – the software designers had been working from an earlier flight plan and final trajectories had not reached Iverson and his team.

Cernan noted: "Apollo 10 would have had a nasty surprise when it arrived on station." The new trajectory would never reach the point where the radar software would do its work.

Radar problems were just a starter compared to the difficulties the LM crew would later face as they attempted to ascend to the CM.

Effing and jeffing above the lunar surface

The ever-ambitious NASA suggested the crew go ahead and land if all went well – after all, the plan was to fly to within 47,000 feet of the surface, why not go all the way? The LM was overweight, however, and as Cernan pointed out: "Too much was unknown." The gang had already dodged a bullet with the radar and the LM wasn't loaded with enough fuel – there would be no last-minute First Man antics from Stafford and Cernan.

Having been sealed inside the LM, with John Young left behind in the suddenly spacious CM, the astronauts undocked at 98:29 into the mission, extended the never-to-be-used landing gear and prepared to make their descent.

The duo were standing, secured by spring-loaded tethers, and relied on the numbers being spat out by the Primary Guidance, Navigation and Control System (PGNCS) (PDF) to tell them where they were. The pair also had another system, called the Abort Guidance System (AGS), which was an auxiliary navigation system for use nearer to or on the Moon. For Apollo 10, however, its purpose was, as Cernan put it, "to get us the hell out of there" if something unexpected happened.

Cernan and Stafford were elated as their spacecraft, face down, sped over the Moon's surface. With a shedload of tasks to perform including snapping shots of a potential Apollo landing site, the two left the communications link open. Cernan reported an all-too-human Stafford cursing at baulky equipment, grumbling: "This goddamn filter. My Hasselblad just failed. This fuckin' camera."

Judging by the transcripts, the exchange did not appear to have been picked up.

After testing as much as they could, including the landing radar, the astronauts had one final task before the LM could return to the CM, overhead and some 300 miles in front. In order to do everything that Apollo 11 might need to, the team were to simulate an emergency. This would involve severing the four bolts that held the descent and ascent stages together and then firing the ascent engine, guided by the AGS.

It did not go well.

Accounts differ for what happened next. In The Last Man on the Moon, Cernan described following the checklist and switching navigational control from PGNCS to AGS. Stafford also performed the step, inadvertently switching back to PGNCS. Of the mistake, Cernan said the pair were "so busy and familiar with the system that we hardly ever looked at the switches we manipulated".

The explosive bolts were fired to separate the stages and, as, Cernan put it: "Snoopy went nuts." The Lunar Module Pilot exclaimed "SON OF A BITCH" over the open microphone as the spacecraft corkscrewed over the surface. Assuming the spacecraft was using AGS, Stafford attempted to select PGNCS, but inadvertently selected AGS and, according to Cernan, the LM, which was supposed to be locking onto the CM found a much bigger target to aim for: the Moon.

Cernan reckoned the episode lasted 15 seconds before the crew took manual control and stabilised the spacecraft, during which Snoopy made eight cartwheels over the surface. Two more seconds of mayhem, according the Lunar Module Pilot, and the spacecraft would have crashed.

NASA's mission report tells the story of the incident slightly differently, skipping the expletives. "At approximately five seconds before staging, the spacecraft started a motion that was characterised by a rapid roll rate accompanied by small yaw and pitch rates." Staging occurred as planned, and "spacecraft motion stopped in approximately 8 seconds".

A later summary in NASA's archives explained the agency's take on what happened:

Inadvertently, the control mode of the LM abort guidance system was returned to AUTO rather than being left in the ATTITUDE HOLD mode for staging. In AUTO, the abort guidance system drove the LM to acquire the CSM which was not in accordance with the planned attitude timeline. The commander took over manual control to reestablish the proper attitude.

Once stabilised, the LM's ascent engine fired on time. The ascent to meet the CM followed a normal profile and docking occurred at 106:22, following eight hours and ten minutes of lunar flight.

The LM was jettisoned after the crew had transferred exposed film to the CM, and the ascent engine fired to send Snoopy into a solar orbit. NASA was able to maintain communications with the spacecraft until its batteries finally gave out after around 12 hours.

50 years on, and Snoopy remains in its orbit, awaiting some billionaire, perhaps bored with launching sports cars, to retrieve the only intact flown Lunar Module.

As for the CM, Charlie Brown, the mission ended safely with a splashdown in the Pacific Ocean at 16:49 UTC on 26 May.

Cernan would go on to command Apollo 17 and earn the dubious honour of being the last man on the Moon in 1972. Stafford commanded the last Apollo capsule used for the Apollo-Soyuz Test Project in 1975. Young commanded the penultimate Apollo lunar mission, 16, in 1972 but stuck around at NASA to also command the first Space Shuttle flight in 1981, and the first Spacelab mission in 1983.

Young's hopes of a last hurrah, launching the Hubble Space Telescope, were ended by the Challenger disaster in 1986. He eventually retired from the agency in 2004.

Cernan died on 16 January 2017, aged 82, and Young passed away on 5 January 2018, at the age of 87. Stafford, now 88, remained active and served on an advisory panel to NASA, memorably penning a letter (PDF) in 2015 expressing concerns at the agency's plans to launch crews atop SpaceX's Falcon 9.

As for Charlie Brown, the Apollo 10 Command Module can be found in London's Science Museum, where it has been since 1976. ®