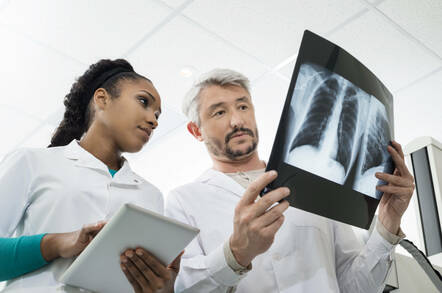 Deep learning algorithms can help doctors predict a patient’s risk of lung cancer, according to fresh research published on Monday.

Lung cancer is the deadliest cancer in the US, there were an estimated 160,000 deaths in 2018. Catching the disease in its early stages can reduce the chance of mortality by up to 43 per cent. Doctors currently screen patients with CT scans to inspect nodules in the lungs. The size, density and growth of the tissues are studied, and doctors recommend treatment plans if necessary.

“Improving the sensitivity and specificity of lung cancer screening is imperative because of the high clinical and financial costs of missed diagnosis, late diagnosis and unnecessary biopsy procedures resulting from false negatives and false positives,” they wrote in a paper published in Nature.

The team developed a convolutional neural network to analyse lung cancer CT scans. The model achieved 94.4 per cent accuracy when it was tested on 6,716 cases. It was trained by looking at nearly 30,000 images taken from the National Lung Screening Trial (NLST), a publicly available dataset.

Each 3D scan is split into “volumes”, and each volume is labelled as cancer-positive if the patient underwent a biopsy or other forms of surgery and was diagnosed with lung cancer, and cancer-negative if the patient was free from the disease a year after the scan.

Nodules are highlighted with bounding boxes. The idea is that the algorithms can examine a patient’s previous and current scans and focus on regions of interest to see if the nodules have developed over time. They are then assigned a “malignancy score” to determine how likely a patient has lung cancer.

The CNN model outperformed six radiologists in clinical settings. It reduced the number of false positives by 11 per cent and false negatives by 5 per cent by analysing the latest 1,139 scans from 209 patients. When the patient’s previous scans were taken into account, however, the algorithms and the radiologists’ performance were even.

“More robust retrospective and prospective studies will be required to ensure clinical applicability as screening programs continue to scale. In future studies we aim to explore different approaches in presenting radiologists with model output assessments, including malignancy risk calculations and localization,” the paper concluded.

The researchers hope that similar algorithms can also be applied to other areas of 3D medical imaging, like MRI or PET scans. ®

MEN: For pity's sake SLEEP with LOTS of WOMEN - and avoid Prostate Cancer

And, um, don't sleep with other men. If that's what worries you

Little bang for the Big C? Nitro in the anti-cancer arsenal

James Bond on a lilo couldn’t match this relaxation agent