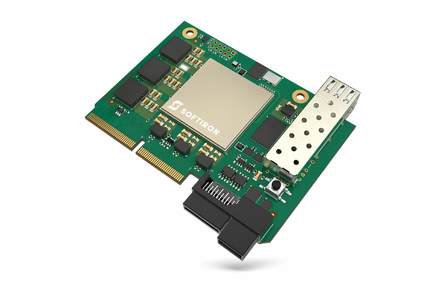 Open-source storage enthusiasts at SoftIron have trotted out a low-cost hardware accelerator designed to take over from the CPU on erasure coding duties.

The HyperDrive acceleration module, or Accepherator – since it is intended for Ceph storage workloads – is built around a field-programmable gate array (FPGA) chip, helping to ensure data protection without a server performance hit. The device also doubles up as a 10GbE network interface.

Erasure coding (EC) is an alternative to RAID that breaks files into multiple pieces and encodes them with additional, redundant information so they can be stored across multiple systems and recovered in case of disk failures or data centre outages – even when not all the original pieces can be retrieved.

EC does not require any changes on the hardware side, but, as it is traditionally implemented on the CPU, it can munch through compute and erode the performance of a storage system.

"Three times replication [the classic data protection model] is expensive, you need to buy and maintain three times the useable storage you need in order to store the data with redundancy," said Phil Straw, SoftIron CTO.

"Traditionally, EC is also expensive to run because it requires a lot of CPU horsepower to run correctly, which essentially just shifts the cost of data parity and transfers it to the CPUs of the storage appliance. This additional CPU load slows storage writes and the only way to solve it has been to use the most expensive, power-hungry CPUs on the market."

Instead of paying through the nose for the latest Xeons, SoftIon strapped an unnamed FPGA to a NIC. The resulting franken-card enables EC on its relatively under-powered processors – the company was one of the first vendors to adopt ARM64 architecture, and its servers are currently running with AMD's "Seattle" Opteron A1100 chips.

SoftIron specialises in hardware for Ceph – a free software storage platform that supports block, object and file storage. Designed to run on clusters of commodity servers, Ceph offers a software-defined storage backend at virtually no cost with replication and snapshot functionality.

The company operates its development and manufacturing in Silicon Valley, but is registered in the UK, with headquarters in Mayfair.

Accepherator was launched at Cephalocon, the Ceph community conference, in Barcelona on Monday. ®