Lyft, Uber drivers boost app surge prices by turning off, tuning out – and cashing in 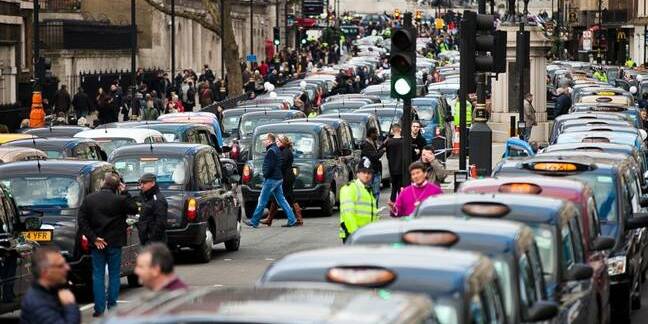 Analysis Drivers for ride-hailing apps Lyft and Uber have organized for better pay through collective action – and not by unionizing.

Here's how it works: a group of drivers who pick up passengers at Ronald Reagan Washington National Airport, outside the US capital, have been turning off their taxi apps simultaneously to influence the surge pricing algorithms used by the two companies.

A report published last week by local ABC affiliate WJLA-TV recounts how a group of 100-150 drivers all turned off their driver apps in sync – coordinated by an individual using an unidentified app – to create the false impression of a local driver shortage.

With the ride supply down as demand peaks, the taxi apps' surge pricing algorithms kick in, offering higher rates to entice more drivers to come to the airport. Minutes later, once the price rises anywhere from $10 to $19 or so, the drivers sign back on and accept the fare at a level they find more reasonable.

Such behavior isn't isolated to Washington DC. On a ride sharing forum, it's claimed that since WJLA's report, the practice has spread to Baltimore Washington International Airport.

And it's probably safe to generalize that any time there's an automated barrier between people and payment, some will try to game the system to their advantage.

Ride sharing companies have been aware of such schemes at least since 2017, if not earlier, when researchers Mareike Möhlmann and Ola Henfridsson, of Warwick Business School in England, and Lior Zalmanson, of New York University in the US, published a paper describing surge pricing manipulation among Uber drivers as pushback to opaque corporate control.

In an email to The Register, Zalmanson, now an associate professor at Haifa University in Israel, said he and his fellow researchers observed similar coordination efforts through online forums in 2016 and 2017.

Uber, he said, "played down these attempts in their comments to media, saying it was 'talk' and that in reality, these incidents didn't materialize."

Zalmanson added that Uber didn't want to communicate about his research findings at the time and said he and his colleagues are still interested in hearing from ride sharing companies because one of the goals of the study is to develop better ride-hailing services.

The Register asked Uber and Lyft to comment on the WJLA-TV report and on whether either is aware of other efforts to game their respective systems.

"Lyft takes any allegations of fraudulent behavior very seriously as it violates our community guidelines and can lead to deactivation from the Lyft platform," a company spokesperson said in a statement emailed to The Register.

Lyft, which declined to provide an on-the-record answer about whether it knows of other manipulation schemes, said recently it has increased payment to drivers – just deemed contractors rather than employees in a decision by the National Labor Relations Board.

"Lyft drivers’ hourly earnings have increased 7 per cent over the last two years, and they have earned more than $14B since we launched," the company's spokesperson said.

"Over 75 per cent drive less than 10 hours a week to supplement existing jobs. On average, Lyft drivers earn over $20 per hour. We know that access to flexible, extra income makes a big difference for millions of people, and we’re constantly working to improve how we can best serve our driver community."

A 2018 survey from Ridester, a ride sharing community site, concludes that a median net income of $14.46 an hour across all service levels and an average net income of $16.42 an hour. Lyft drivers, the biz suggests, earn about $2 more per hour on average.

That's after the ride sharing company has taken its commission but before driver expenses like gas, insurance, lease payment and depreciation, which further reduce pay by about $5 to $10 per hour. Thus an Uber driver in Philadelphia, where the median pay is $17.62 per hour, makes about $9.25 per hour after all expenses are taken into account.

Zalmanson said what while algorithms used by ride sharing companies have played a role in their popularity, by offering an alternative to taxi industry risks like meter manipulation and price gouging, they also represent a threat to the business.

"Algorithms isolate the workers by using mechanistic decision-making processes, which are automatic and immediate," he said. "They make it hard to form connections and solidarity amongst workers and lower the sense of belonging to a community of practice. In this sense, they lower loyalty to the company and promote 'every man for himself' type of attitude which in the end may hurt any organizational commitment."

Algorithmic transparency, something the AI industry has wrestled with to counter concerns about bias, may be difficult, Zalmanson suggests, because the business models of ride sharing companies depend on secrecy and because machine learning models can be difficult to understand.

"Before attempting that, I think Uber and such companies should encourage a community of practice for their drivers and allow for more humans in the loop to hear out and act upon drivers concerns," he said.

"Uber has begun doing just that after our period of data collection in 2017 but drivers have since reported it felt a bit like lip service as they continued to discredit drivers' complaints." ®