It's 50 years to the day since Apollo 10 blasted off: America's lunar landing 'dress rehearsal'

Charlie Brown and Snoopy go to the Moon 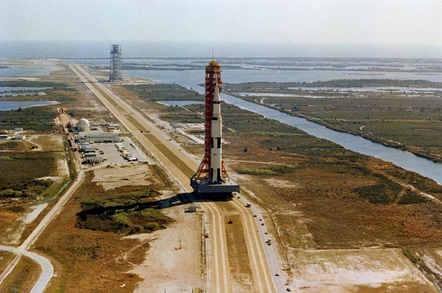 Part One Today marks the 50th anniversary of Apollo 10, the mission that would do pretty much everything except land on the Moon.

Flushed with success following Apollo 9's shakedown of the Lunar Module in Earth orbit (despite a poorly astronaut for much of the trip), NASA pressed ahead with the first mission to send the complete Apollo stack – Command and Service Module (CSM) and Lunar Module (LM) – into orbit around the Moon and take the LM out for a jaunt.

Unlike Apollo 9, Apollo 10 was made up entirely of veteran astronauts, all of whom had spent time squeezed into the cramped confines of the Gemini capsule.

It was to be the third flight for commander Tom Stafford, who had his share of thrills thanks to Gemini 6A. Originally Gemini 6, the mission was redesignated 6A after the Agena capsule it was supposed to dock with was destroyed shortly after launch. With nothing with which to dock, NASA ended up launching 6A on 15 December 1965 to rendezvous with the Gemini 7 of Frank Borman and Jim Lovell, who had been "enjoying" a lengthy spell in their capsule following a 4 December launch into orbit.

The first attempt to get 6A off the ground had ended abruptly when the engines cut off less than two seconds after ignition. Commander Wally Schirra should have pulled the ejection ring to fire the crew to safety, but was convinced that the rocket had not actually left the pad and so did not. Stafford later commented that had Schirra done so, the pure oxygen atmosphere would have sent the 'nauts out like "two Roman candles".

The next mission, Gemini 8, would see its rookie crew of Neil Armstrong and David Scott battling with a malfunctioning thruster as their spacecraft spun out of control having achieved the first successful rendezvous and docking of the programme.

Also on his third flight was John Young, who flew the first crewed mission of the Gemini programme with Gus Grissom. Gemini 3 was launched on 23 March 1965 and, as well as shaking down the capsule, led to a reprimand for the crew after Young smuggled a corned beef sandwich on board as a substitute for the less than palatable rations of the time. Young would go on to command Gemini 10 (with Mike Collins as pilot) in July 1966.

Eugene Cernan, on his second flight, rounded out the crew. Cernan had already flown with Stafford on Gemini 9A, a mission which did not go to plan.

Stafford's luck with the Agena showed no signs of improving as the target vehicle exploded during launch. Renamed 9A from 9, the Gemini was eventually launched on 3 June 1966 and rendezvoused with the Agena backup, the Augmented Target Docking Adaptor (ATDA), only to find that the payload fairing for the ATDA had failed to separate, making a docking impossible.

The highlight of the mission should have been Cernan clambering to the back of the spacecraft during an Extra Vehicular Activity (EVA) in order to take an Astronaut Maneuvering Unit (AMU) out for a spin. Alas, Cernan struggled with the stiffness of his suit, a lack of hand and footholds on the Gemini and the effects of overheating as he made his way to the AMU. His visor fogged as he perspired and by the time he finally made it to the rear of the spacecraft, Stafford called a halt to proceedings and the EVA was wisely abandoned.

It had been a close thing, as Cernan noted in his book The Last Man On The Moon.

Being veterans, and with two crew having experienced what could be charitably be called "off-nominal situations", the Apollo 10 astronauts would be well suited for what lay ahead.

Apollo 10 was to be an eight-day jaunt to the Moon and back, with the primary goal being to demonstrate lunar rendezvous and navigation.

The Saturn V was launched at 1649 UTC on 18 May and, according to the NASA mission report (PDF), was mostly nominal. The first stage, the S-IC, enjoyed a normal trajectory with the engines cutting off within 1.7 seconds of the planned burn. The S-II also went well, with the capsule's Launch Escape System jettisoned within 1.4 seconds of plan and any minor trajectory deviations corrected during the firing of the S-IVB, leaving the spacecraft in a parking orbit of 102.6 miles by 99.6 miles.

After just over two and a half hours of checking out the systems, the S-IVB was ignited again for the translunar injection.

Three hours, two minutes after launch, the Apollo CSM seperated from the S-IVB and turned to pluck the LM from the Saturn stage. The manoeuvre should have seen the CSM move 50 feet from the S-IVB before turning (based on the Apollo 9 experience) but controllers noted the distance actually ended up being more like 150 feet, possibly due to a difference in weight of the S-IVB.

The S-IVB was then fired into a solar orbit (as was done for Apollo 8's S-IVB) and, aside from a planned midcourse translunar correction and the first live colour television broadcasts by the crew from space, the cruise was uneventful. The Apollo 10 CSM, dubbed Charlie Brown, and the LM, Snoopy, dropped into a 60 x 171 nautical mile orbit around the Moon just before 76 hour mark before being circularised to 60 nautical miles at 80:25.

The stage had been set for Apollo 11 and some impressively sweary antics from the Apollo 10 crew. ®