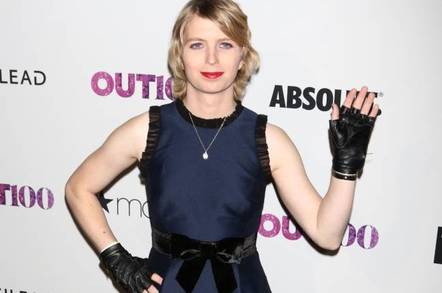 After seven days of freedom, US Army whistleblower Chelsea Manning is back behind bars for refusing to testify before a secret federal grand jury investigating WikiLeaks.

District Court Judge Anthony Trenga ordered Manning back to prison, and said she will, in addition, be fined $500 a day for the first 30 days in the clink, and $1,000 a day after that, until she testifies. Manning previously served 63 days in the cooler for refusing to talk, 28 of which were in solitary confinement.

“We are of course disappointed with the outcome of today’s hearing, but I anticipate it will be exactly as coercive as the previous sanction — which is to say not at all,” her attorney Moira Meltzer-Cohen said in a statement on Thursday.

“In 2010 Chelsea made a principled decision to let the world see the true nature modern asymmetric warfare. It is telling that the United States has always been more concerned with the disclosure of those documents than with the damning substance of the disclosures.”

The grand jury, which was kept secret until a typo revealed its existence, is researching the 2010 WikiLeaks publication of US State Department cables and the Collateral Murder video showing two journalists being killed in Iraq by US forces, as well as other documents relating to the ongoing wars in Iraq and Afghanistan.

Manning was arrested shortly after WikiLeaks published the cables and vid online. She was snared because the late and little lamented ex-hacker Adrian Lamo had befriended her online, and passed their chat logs, in which she took credit for leaking the secret material, onto the Pentagon. She was sentenced to 35 years in prison in August 2013, although 112 days were thoughtfully removed after the judge ruled that she had been tortured while being held in military prison.

After nearly seven years behind bars, Manning had her sentence commuted by President Obama, and was a free woman, for a while. Her refusal to testify in front of a secret grand jury on the grounds that they are undemocratic means she has now been taken into custody again until she changes her mind.

“The prosecutors are deliberately placing me in an impossible position: go to jail and face the prospect of being held in contempt again or forgoing my principles and the strong positions that I hold dear. The latter is a far worse jail than the government can produce.” ®