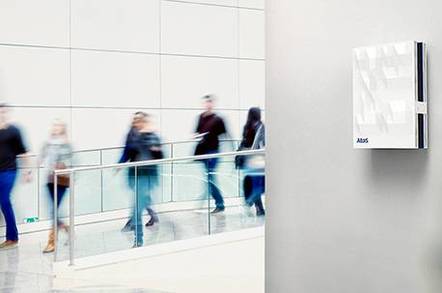 French tech services biz Atos has squeezed out its first edgy server box to be deployed outside of the data centre.

The system, BullSequana Edge, contains a 16-core Xeon D SoC alongside two SATA drives and up to 512GB of RAM. While the CPU is relatively underpowered, the Edge can house two Nvidia Tesla T4 GPUs for machine learning applications, and there's an option to add FPGAs to the mix.

The server does not depend on Ethernet connectivity, and can also communicate using LoRa radio – a proprietary long-range radio standard originally developed in France by Semtech – as well as GSM or Wi-Fi.

Since the server is likely to be deployed in remote locations, it is equipped with a physical intrusion sensor that will disable the machine if it becomes a target of street violence. There's also a trusted platform module (TPM) onboard.

The standalone case can be mounted on a wall or in a rack using optional conversion kits.

Atos took over the Sequana brand with the acquisition of server and supercomputer vendor Bull in 2014. It has since expanded the range of x86 hardware – though BullSequana Edge is one of the strangest servers it has ever produced.

The system was created to deal with data at the point of origin – something that would be useful when hauling it back to a corporate data centre or public cloud is impractical, takes too much time, or is simply too expensive.

As an example, the company said the box could power the dreaded video surveillance systems equipped with facial recognition, or be used to create a distributed data lake for real-time IoT analytics – it supports streaming analytics tools like Spark and Kafka.

The company highlighted research by bean-counters at Gartner who predicted that by 2022, up to 75 per cent of enterprise data will be created and processed outside of traditional server hosting facilities. Today, just around 10 per cent of data originates beyond the corporate firewall. ®

Red Bull does NOT give you wings, $13.5m lawsuit says so

French IT giant Atos is officially full of Bull.... and €620m lighter

Embiggened firm expects to hit no 2 spot in EU cloud

The Internet of Cows is moo-ving fast … no bull!

Ah, so that's why French IT giant Atos is officially full of Bull