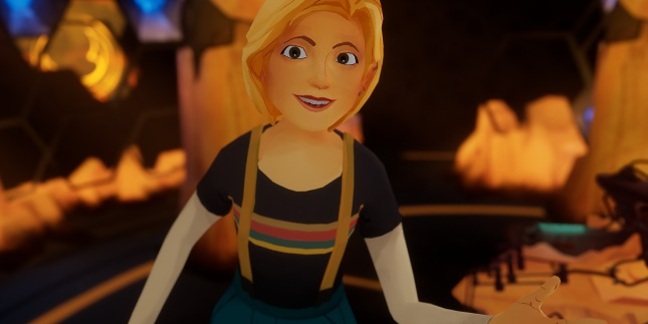 Updated Doctor Who fans, faced with waiting until 2020 before the blue police box appears on their screens once more, were thrown a virtual reality bone by the BBC today.

As arguably the biggest nerd at Vulture Central, this correspondent was assigned the task of strapping on a Rift and firing up the BBC Digital Drama Team's 13-minute take on a Whovian VR experience.

Those hoping for some live Who action to stave off those long lonely nights until the next series will be sadly disappointed. Doctor Who: The Runaway is animated with an art style that leans more towards the cartoonish than the uncanny reality of something like Lone Echo.

This is no bad thing. While not hugely detailed, the imagery is pleasant on the eye, and the animation of the Doctor herself is natural and fluid.

The story has the Doctor (voiced by the current occupant of the live-action role, Jodie Whittaker) attempting to return a creature called Volta to its home planet before the proverbial hits the fan. Naturally, things don't go smoothly and the player is recruited as assistant to deal with the forces of evil on the way.

"Player" is perhaps an exaggeration. While the participant is issued with one of the famous sonic screwdrivers (I perhaps spent more time than I should studying it and turning the thing on and off), actual interactivity is limited to picking stuff up, pointing at things and having a crack at steering the TARDIS in a manner that calls to mind an earlier BBC Who VR tie-in – the Time Vortex. A BBC rep assured us the two projects were not connected.

It's certainly no Extremis in terms of simulated worlds.

The participant is also instructed to remain rooted to the spot – there is no wandering to be had, which is a shame. Many viewers of the television show would welcome an opportunity to poke around the set, or even to peer out of the door. For me, at least, the length of cable and size of physical room precludes much in the way of nosing about.

Think more Invasion! or Crow: The Legend in terms of letting the action happen around you rather than the interactivity of Coco VR.

And in the VR world, the interior of the TARDIS is most certainly larger than the player's physical room. There's a colossally nerdy joke to be made there.

That said, if you enjoy Whittaker's take on the role (and the current style of Who), there is much to enjoy. Series composer Segun Akinola has provided the music with Victoria Asare-Archer taking on writing duties. The tone is consistent with the Chibnall era.

However, if the idea of anyone but Tom Baker in the TARDIS is like nails on a blackboard, don't bother.

And, of course, it is free(ish). You can have your own discussion about the pros and cons of the licence fee in the comments.

As well as popping up in the Oculus Store, the experience can also be had on HTC Vive. A 360-degree video version can be downloaded from the BBC VR App for the Oculus Go and GearVR with a shortened runtime of 11 minutes.

And yes, although the BBC has yet to confirm it, I'm sure the baddies are voiced by the same person who did the Knights in Robot of Sherwood. Now, where did I put that anorak? ®

A BBC spokesperson confirmed that it was indeed the same actor providing the vocals. They also told us that Windows Mixed Reality headset wearers are out of the luck this time around. The Beeb has "no plans" to support the things at the moment.