Want a good Android smartphone without the $1,000+ price tag? Then buy Google's Pixel 3a

Ad goliath's latest has struck all the right compromises 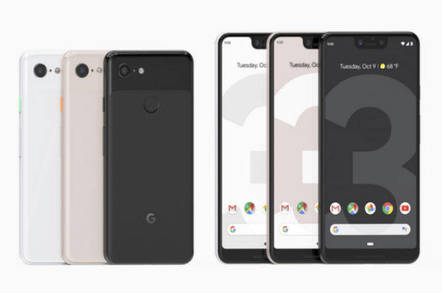 The Pixel 3a (left) and its larger XL sibling

Hands on Let's get this over with straight away: if you want a new smartphone but don't want to pay an increasingly stupid price tag, then get the Google Pixel 3a. It's $399 or £399, and it does everything you want and does it really well.

There: that's it. You can now go about your day. If you want to know how this is done, or love nerding-out about phones then you'll need to read further.

OK, if you're still reading, the obvious big question is how did Google manage to produce an Android 9.0 phone that looks, feels and acts like one that costs two or three times as much? And the answer is pretty simple: it cut out all the stuff that costs money that you don't really need. You can check out the tech specs, here.

So, there's no wireless charging. Which, if you already have, you might miss. But probably not that much. How hard is it to plug in a cable? We've been doing it for decades.

There's also a single front camera, rather than the dual camera that gives better, wider shots. So it won't be the phone of choice for selfie-takers. Frankly, that's makes us like it more. In fact, Google should run an ad for the Pixel 3a that features Instagramites getting annoyed that they can't get the best possible pictures of themselves. Narcissus staring longingly at himself in a puddle was supposed to be a cautionary tale, not a recommendation.

It's not waterproof. Which is, again, terrible news for Narcissus but absolutely fine for everyone else. It is, after all, a phone. And money has been saved by not just using metal and glass but rather some kind of high-end polycarbonate plastic. If you stick a case protector on it, as you should with any phone, you will probably never know the difference.

And then the key cost-saving compromise: it has a slower processor. It has the modest eight-core Snapdragon 670, whereas the high-end phones are using the Snapdragon 845 or 855. Critically, however, even though you will occasionally notice the phone taking longer than you want, the difference is negligible between the Pixel 3a and phones like the latest Apple iPhone or Samsung Galaxy.

There isn't a phone on the market that doesn't take a second longer than you want at various points. For the iPhone, this reviewer often finds the fingerprint reader has a small delay. Same when switching apps – especially if video is involved. The Pixel 3a has the same issue with app switching and starting videos but, amazingly, its fingerprint reader seems almost instantaneous.

Yes, that's right, this $400 phone has a fingerprint reader. And it's on the back which is actually much more convenient that having it on the front.

Google has apparently gone to some trouble to optimize its software to make it work faster with a slower processor and whoever was on that team deserves a raise. Whatever magic they cooked up made it possible for a "budget" phone to feel exactly like the Ferraris of the phone world.

Just as crucially, here is what Google didn't scrimp on: it has the same camera as the Pixel 3. And it is an amazing camera. It can get a great picture in low light and has great resolution, zoom, panorama and portrait options – basically everything you will ever need. It is literally a marvel of modern engineering.

Google readies Pixel for the masses, but are the masses ready for Pixel?

The phone also has a useful squeeze system where you can squeeze the bottom of the phone to bring up Google's digital assistant, or to silence an incoming call. Like the fingerprint detector on the back this is something that this reviewer started using almost immediately and felt very instinctive.

What does this mean in reality? It means you will have to take Google up on its offer to host photos and videos on its cloud service. And you'll want to stream music – but then aren't you already?

There is one caveat with the photos: Google is only going to save them as high resolution and not the full max resolution. But, again, do you really need your photos at full resolution? Or do you just hate the idea of not having the absolute best thing even when you won't notice if you have it or not? Because that high resolution is plenty high enough; if you're taking pictures for an advertising agency, maybe buy a DSLR.