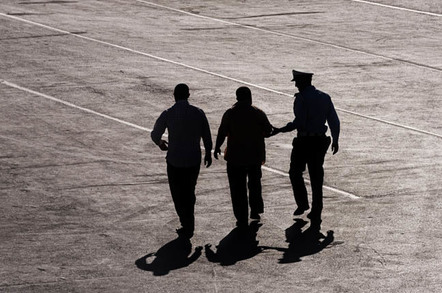 Ten people have been accused of masterminded the theft of roughly $100m from bank accounts using the Goznym malware. Five have been arrested, charged, and are facing prosecution, and five have been indicted and remain at large. An eleventh person linked to the software nasty is awaiting sentencing after admitting his crimes.

Goznym was a highly sophisticated piece of Windows malware that raided the online bank accounts of some 40,000 victims: it would lurk on PCs waiting for folks to log into their accounts, snatch those details, and pass them onto crooks who would then clean out the accounts. The Feds and cops made their move, smashing the crime ring by nabbing its suspected members, after dismantling the Avalanche server network, which was set up to spam out emails that tricked victims into downloading and installing software nasties like Goznym.

“This takedown highlights the importance of collaborating with our international law enforcement partners against this evolution of organized cybercrime,” said FBI Pittsburgh Special Agent in Charge Robert Jones on Thursday.

“Successful investigation and prosecution is only possible by sharing intelligence, credit and responsibility. Our adversaries know that we are weakest along the seams and this case is a fantastic example of what we can accomplish collectively."

Goznym surfaced in 2016, and was able to circumvent antivirus packages by encrypting its code and data. In order to develop this nasty, investigators claimed, the gang recruited technical specialists, who advertised their programming and cryptography skills on dark web forums, and pulled together the Goznym team: think Oceans 11 with extra scumminess.

The indictment [PDF] of all ten was announced today at Europol headquarters by crimebusters from the US, Georgia, Ukraine, Moldova, Germany, and Bulgaria.

We're told the alleged ringleader Alexander Konovolov, 35, of Tbilisi, Georgia, and his alleged technical assistant Marat Kazandjian, 31, of Kazakhstan and Tbilisi, Georgia, have been arrested and charged in that nation in connection with the banking malware, and are being prosecuted there.

Krasimir Nikolov, of Varna, Bulgaria, is accused of being a casher, a person who funnels victims' funds into bank accounts controlled by the gang: he was arrested in 2016 by Bulgarian authorities, and extradited to the US. He pleaded guilty to banking fraud charges last month, and will be sentenced in August this year.

Gennady Kapkanov, 36, of Poltava, Ukraine, who allegedly ran the Avalanche server farm that spewed more than 20 strains of malware, was also arrested in 2016, in dramatic fashion. As the plod tried to storm his apartment, he held them off with an assault rifle, according to the US Department of Justice, but was cuffed and now faces multiple charges in his home country.

Alexander Van Hoof, 45, of Nikolaev, Ukraine, was also arrested and charged with banking offenses as he was also a suspected casher for the crew. Meanwhile, Moldovan cops swooped on Eduard Malanici, 32, of Balti, Moldova, who allegedly encrypted the malware, along with two unnamed associates, and faces prosecution in that nation.

Five Russian members of the team named [PDF] in the indictment remain on the run. They include the suspected malware designer Vladimir Gorin, of Orenburg, Russia, and Konstantin Volchkov, 28, of Moscow, Russia, who is said to have designed the phishing emails to spread the malware. Viktor Eremenko, 30, of Stavropol, Russia, and Farkhad Manokhin, of Volgograd, Russia, are also accused of helping the gang drain cash out of victims' compromised bank accounts. Manokhin was cuffed in Sri Lanka in 2017, at the request of US prosecutors, but managed to flee to Russia where he remains at large. Ruslan Katirkin, 31, of Kazan, Russia, is also accused of being a casher for the gang.

“International law enforcement has recognized that the only way to truly disrupt and defeat transnational, anonymized networks is to do so in partnership,” said US Attorney for Pennsylvania Scott Brady.

“The collaborative and simultaneous prosecution of the members of the GozNym criminal conspiracy in four countries represents a paradigm shift in how we investigate and prosecute cybercrime. Cybercrime victimizes people all over the world. This prosecution represents an international cooperative effort to bring cybercriminals to justice.” ®