Time to reformat the old wallet and embiggen your smartmobe: The 1TB microSD is here 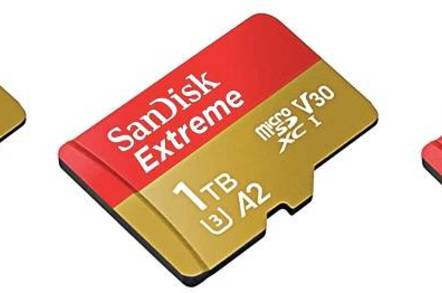 As of today, you can now buy a 1TB micro flash card to store massive amounts of pictures and videos on your camera or mobile phone – though it'll set you back a not inconsiderable $449.

SanDisk has said its Extreme 1TB microSD card is shipping to customers after being announced in February.

The thing has been selling for £453.99 on Amazon's UK website since this morning – though there was only one left at the time of publication.

MicroSDXC cards are fingernail-sized and fit any device with a microSDXC slot – so you can slip 'em into digital cameras, drones, tablets and notebook computers as well as your smartmobe.

The card can do sequential reads and writes at up to 160MB/sec and 90MB/sec.

It has an A2 application performance class, meaning it meets minimum IO standards of 4,000 random read IOPS, 2,000 random write IOPS and can sustain sequential writes at 10MB/sec. The previous A1 Standard specified 1,500/500 random read/write IOPS and the same 10MB/sec bandwidth.

As for Micron's c200 1TB microSDXC card (PDF) – which was announced at massive trade show Mobile World Congress at the same time as SanDisk's – there is as yet no sign. This card has an SLC cache and up to 100 MB/sec reads and 95 MB/sec write performance. The firm hasn't been more specific than to say that it should be available in Q2 of 2019 – so before the end of next month.

Samsung has also promised a 1TB Pro microSDXC card is coming. It currently has 512GB EVO Select and EVO Plus cards available for $99.99 and $102.90 respectively on Amazon.