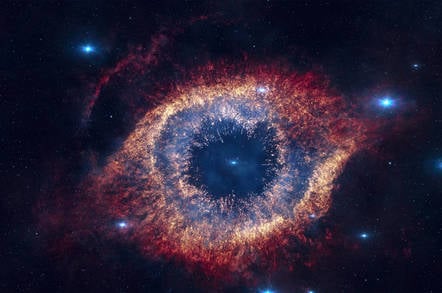 An image of the Helix Nebula, a planetary nebula formed around a dying low-mass star

When a star dies, destroying so much around it, it’s the small, dense rocky planets that are the objects most likely to be left standing while the heavy, gassy planets crumble and perish.

A team of astrophysicists came to this conclusion after modeling the tidal interactions between a white dwarf star and a nearby planet to determine whether the world could endure the star’s annihilation. This is interesting because our own sun is expected to become a white dwarf star as it dies, and you can't help but wonder what Earth's fate would be.

The boffins calculated the star’s destruction radius, a region where objects that are held together solely by gravity will be ripped apart by the star’s tidal forces. The simulations showed that the heaviest planets with the lowest viscosities (think gas giants and water worlds) are more likely to be destroyed.

It doesn’t matter if these types of objects are further away from the destruction radius, the size of orbits can change as they get dragged into the danger zone. By contrast, small, rocky planets crammed with heavy elements are more likely to survive.

The results show that exo-Earths – exoplanets with a similar size and mass to Earth – made out of low viscosity materials like gas, ice, or snow are easily engulfed by a white dwarf star even if they’re five times the distance between the center of the star and its destruction radius. Little rocky exo-Earths, on the other hand, are only swallowed if they’re at twice that distance.

And you thought hangovers were bad

The death of a star is catastrophic for any planetary system. As the hot balls of plasma run out of hydrogen reserves, gravitational forces take over and crush its body. The pressure causes the star to burn up and expand in size until it sheds its outer layers furiously, leaving behind a core.

Unfortunately, the planets around it will be subjected to the lethal lashings of hot ionised gas. As the core transitions into a white dwarf star that will continue cooling until it crystallises, life on most orbiting planets will have died, but some creatures may just survive.

The research published this month in the Monthly Notices of the Royal Astronomical Society is in agreement with the recent finding of an odd planetary fragment found orbiting a dead white dwarf.

“The paper is one of the first-ever dedicated studies investigating tidal effects between white dwarfs and planets,” said Dimitri Veras, first author of the paper and assistant professor at the University of Warwick in England, on Tuesday.

Although small, dense rocky planets are more likely to survive, it doesn’t mean the Earth will stand a good chance when the Sun finally blows its lights out. The researchers aren’t sure how Earth will behave really.

“Our study, while sophisticated in several respects, only treats homogenous rocky planets that are consistent in their structure throughout. A multi-layer planet, like Earth, would be significantly more complicated to calculate but we are investigating the feasibility of doing so too,” said Veras.

The team hopes that this will help scientists find exoplanets around white dwarf stars. “This type of modelling will have increasing relevance in upcoming years, when additional rocky bodies are likely to be discovered close to white dwarfs. Our study prompts astronomers to look for rocky planets close to – but just outside of – the destruction radius of the white dwarf,” Veras concluded.

“So far observations have focused on this inner region, but our study demonstrates that rocky planets can survive tidal interactions with the white dwarf in a way which pushes the planets slightly outward.” ®