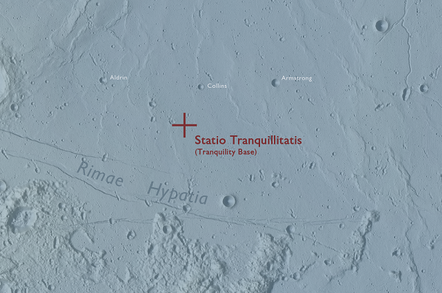 The UK's Ordnance Survey has followed up the Mars map with a little something to celebrate the 50th anniversary of the Apollo 11 landing in its own, distinctive cartographic style.

Paul Naylor, programme chair and council member of the British Cartographic Society, spent three weeks painstakingly piecing together data to create the map, which covers 1,350km by 1,000km of the lunar surface at a scale of 1:1,470,000.

Wannabe lunar orienteers will be delighted to note the traditional design aesthetic and the classic Ordnance Survey approach to the map, even if their compasses might not be quite as reliable as the output of the venerable British institution. We'd suggest the imagery would be more suited to the wall than a ramble on the regolith.

The next step was to locate the Apollo 11 landing site and clip the surroundings for that pleasingly rectangular 1,350km by 1,000km and apply some hill shading to bring out the detail in the terrain.

A colour ramp was then created based on a palette inspired by the 2018 Insight Investment Astronomy Photographer of the Year (Our Moon category)-winning image taken by Jordi Delpeix Borrell. The resulting palette was applied to the original DEM and, with some transparency added, overlaid on top of Naylor's hill shade.

Labels for craters, mountain ranges, ridges and so on were then added, along with the actual landing site before a grid was placed for distance, latitude and longitude. The thing was finally exported for some fettling in a graphics package.

The result, said Naylor, "was an absolute joy to make" and, as you would imagine, can be picked up from the Ordnance Survey shop to delight the lunatic in your life.

An Ordnance Survey spokesperson also exclusively told The Register that Naylor had hidden some Easter eggs in the map for the eagle-eyed to find (see what we did there?).

We can but hope that NASA can find the required £15.99 in its $1.6bn additional budget request to equip its brave astronauts with a paper backup in the event their electro wizardry lets them down. ®

Two retro treats for you, cartofans

Plenty of craters, a bit short on pubs