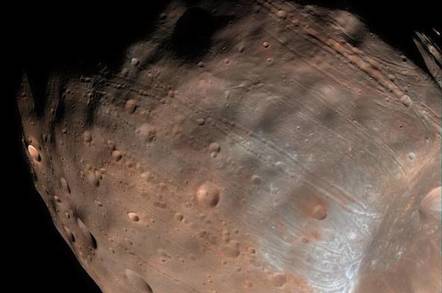 Japanese space agency JAXA has been given the all clear from eggheads to attempt a landing on Mars' largest moon, drill into it, and bring a sample back to Earth without an Andromeda Strain incident.

The mission, dubbed MMX and scheduled for 2024, will involve a robot arm attached to a spacecraft boring a hole into Phobos. It comes hot on the heels of JAXAS's ongoing sample return mission to the asteroid Ryugu, where the Hayabusa 2 spacecraft fired a projectile into the space rock’s surface to dig a crater, into which it landed to collect a tiny sample for return to Earth, as well as picking up dust from the surface.

While welcome, it's a lot of work for not much of a sample. For the planned Mars mission, JAXA want a device that can scrape together more than ten grams of material at a time from well underneath the moon's surface.

But first, the bureaucracy

Although the rest of the Solar System besides Earth may not be populated with life, humans exploring the system are still bound by human-issued rules and regulations. You can’t just dig things up and take what you like: you need permission before you accidentally contaminate a place like Phobos with Earth life, or wreck whatever may be living on the moon. JAXA had to apply for clearance to bore into Phobos, and luckily, that permission was granted by the world's Committee on Space Research's Planetary Protection Panel last month.

The panel is made up of an international team of scientists to uphold the United Nations’ Outer Space Treaty of 1967. One of the basic principles says that “states shall avoid harmful contamination of space and celestial bodies.”

In other words, COSPAR officials believe there is little evidence that Phobos contains much or any life and they’re more concerned with potentially contaminating the lumpy-looking moon with Earth’s germs. It'll be rather annoying to later study the place and find signs of life that then turn out to be from Earth.

“We have conducted comprehensive statistical assessment of potential microbial contamination of Martian moons, Phobos and Deimos, which can be brought about by transportation of Mars ejecta produced by meteoroid impacts on the Martian surface, based on the most probable history of recent major gigantic meteoroid collisions discovered so far on the present Martian surface,” Kazuhisa Fujita, a professor working at the Department of Space Flight Systems at the Institute of Space and Astronautical Science (ISAS), a division of JAXA.

“As a result, taking samples as much as 100 grams in a controlled manner is found to result in the fact that the probability of one microbe contained in the samples remains much less than 10-6 which is the upper limit recommended by COSPAR.”

Phobos and Deimos AKA fear and panic, and dread and terror

There is a tiny and improbable chance Phobos and Deimos contain Martian microbes. It’s possible that meteoroids smashing into the surface of the Red Planet could kick up dust and transport microbes, if they even exist on Mars, onto its moons. Any life, however, would have to survive the impact of the collision, the aerodynamic heating of travelling to Phobos, and the heavy solar and cosmic radiation Phobos receives from outer space.

JAXA is allowed to explore a range of techniques to obtain samples of Phobos as long as the probability of taking a single, unsterilized particle, measuring no less than 10 nanometers in diameter, contains a single microbe is less than 0.000001 per cent. “For example, taking 100 gram samples within an 8 centimeter depth by a coring device is one of the acceptable candidates,” Fujita explained.

NASA is currently helping JAXA develop an instrument to see if Phobos contains any water. Known as MEGANE, meaning eyeglasses in Japanese, the probe studies gamma rays and neutrons produced by cosmic rays interacting with chemical elements on the moon’s surface.

“They [Phobos and Deimos] may have formed as the result of a large impact on Mars, or they may be captured asteroids of a sort that may have brought a great deal of water to both Mars and Earth,” Masaki Fujimoto, director of the department of solar system science at JAXA’s Institute of Space and Aeronautical Sciences, previously said.

“Knowing the origin of evolution of planets that lead to life is an important scientific goal. We believe that the returned samples will definitely provide clues about their origins and offer an opportunity to directly explore the moon’s building blocks or primitive crust or mantle components of Mars,” a JAXA spokesperson concluded. ®