Two Capita staffers to double up as non-exec directors, get keys to corporate biscuit barrel

Meet Murphy & Browne: Not a crap cop show, but the pair to represent 63k poor employees 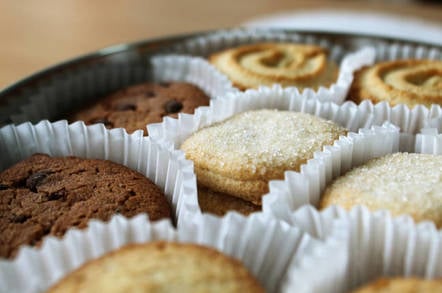 Soon to enjoyer a posher class of biscuit: Murphy and Browne

Less than 0.6 per cent of Capita's workforce applied for the two non-exec director roles that afford the lucky winners – if that's the right term – a seat on the board and possibly an executive biscuit budget.

The two "director employee appointments" include Lyndsey Browne, a finance manager in the Insurance Services division who has been stuck at Capita since 2003, and Joseph Murphy, a project manager in Real Estate and Infrastructure who offers "technical due diligence" and advice on projects.

Now the pair will be expected to turn up alongside Capita's other big nobs – the actual permanent board bods – and provide the different perspectives that CEO Jonathan Lewis said he so desperately craves.

The idea is that Capita's captains can lean on normies Murphy & Browne when they want to, say, start charging more for canteen cutlery, or make 1,000+ people redundant. The pair could act as test bed and are likely cheaper than the consultants at McKinsey.

Or as Capita put it: "In their new non-executive roles, they will provide an employee's perspective and expertise, and input into strategy decision-making with the same level of authority as other directors."

This move is all part of Lewis's efforts to turn around Capita after several years of falling sales and profit warnings.

Both Browne and Murphy still have day jobs to do but each will be handed "time allowances" to fulfil their expanded duties. And both will receive the same pay as other non-exec directors.

For clarity, the two are set to be given an additional £64,500 for their troubles as non-exec directors (which isn't too shabby, but then again your correspondent is used to a journalist's wage).

The pair will also be given additional training for the roles, which presumably involves drowning kittens, laughing at crying children and pushing elderly folk off buses, as well as corporate governance.

Capita said fewer than 400 employees lunged at the opportunity to bag a seat on the board. Capita employs 63,000 poor souls.

Powell said in a statement that he is "delighted" to add some human fresh blood to its top table, and "proud that Capita is the first FTSE 250 company in many years to make such appointments".

"We are determined that the employee's perspective and increased diversity of thought are represented at board level," he added. The proof will be in the pudding, and El Reg will keep an eye out for any sensible strategies that look like they've come from the mouths of Browne and Murphy.

We won't hold our collective breath, though. ®