Apple won't be appy: US Supremes give green light to massive lawsuit over App Store prices 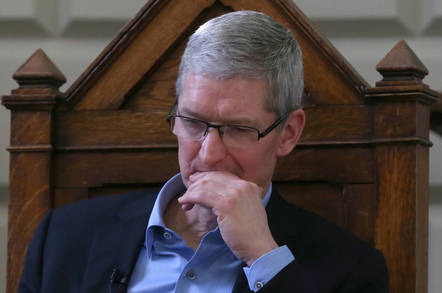 Folks can sue Apple in the US for forcing app developers to pay the iGiant a 30 per cent commission, America's Supreme Court has decided.

The tight 5-4 decision today [PDF] against Apple has huge implications for not just for the tech giant – whose share price has fallen six per cent this morning on the news – but also Google, which runs a similar system, and the technology market in general.

The four iPhone owners who kicked off the legal battle argue they have to pay higher prices because Apple is abusing its monopoly on apps on the iOS platform to impose unreasonable conditions on application developers.

Apple charges a 30 per cent commission on app sales, and while it allows developers to set their own price, requires that price end in .99 cents. The money is "pure profit," the lawsuit contends because there are negligible additional costs to Apple to adding a new app to its store. Critically, consumers pay Apple and the biz takes its cut before sending the remainder of the money to developers.

Apple has argued all the way to the Supreme Court that the entire lawsuit is invalid, and wanted it thrown out, because only app developers should be able to sue it for what it charges them, especially since they are able to pass the cost onto their customers. The only legal beef allowed should be between itself and app developers, Apple argued.

Apple relied on a Supreme Court precedent (Illinois Brick, 1977) in which the State of Illinois was told it could not sue a brick-making company for overcharging construction companies that needed the bricks because the state was not a direct purchaser of the bricks.

And that argument split the Supremes this time around, with the dissent insisting that the Illinois Brick case holds because it explicitly rejected a "pass-on theory" identical to the plaintiffs in this Apple case. However, the slim majority argued that the fact that consumers buy apps directly from Apple means the situation is different and so the Illinois Brick case does not hold and the underlying lawsuit can continue.

Not learnt a lot

It is worth noting that neither side really dug into the realities of app stores and digital marketplaces, relying instead on precedents about bricks and shoes (Hanover Shoe v United Shoe Machinery, 1968) to make their case. The right decision was made, but it did not contribute much understanding of how the world has changed in the internet era.

The majority opinion held that the case was "a classic antitrust claim" where Apple has "used its monopoly to overcharge consumers." Since the iPhone owners that sued purchased apps directly from Apple they "therefore are direct purchasers under Illinois Brick." This was the same decision reached by the Ninth Circuit Appeals Court in 2017.

In essence, the Supremes decided that: "If the retailer’s unlawful monopolistic conduct caused a consumer to pay the retailer a higher-than-competitive price, the consumer is entitled to sue the retailer under the antitrust laws."

And it shot down Apple's legal response by arguing that if the current system was allowed to stand it would "provide a roadmap for monopolistic retailers to structure transactions with manufacturers or suppliers so as to evade antitrust claims by consumers and thereby thwart effective antitrust enforcement."

The dissent was also worried that simple contractual changes could see companies use the decision to their advantage – but in the opposite direction: "To evade the Court’s test, all Apple must do is amend its contracts. Instead of collecting payments for apps sold in the App Store and remitting the balance (less its commission) to developers, Apple can simply specify that consumers’ payments will flow the other way: directly to the developers, who will then remit commissions to Apple."

But in that sense, the dissent doesn't understand that selling bricks is wildly different to selling apps. For one, apps cover every facet of our lives from social to professional to personal while a brick has pretty much only one use. Apps are available for free all the way up to $999.99 (Apple's limit). There are several apps at that highest price, incidentally – one of them is a piano-tuning app called CyberTuner. You can buy different bricks of course but no one can seriously argue that they are that diverse.

Perhaps more importantly is the dissent's argument that Apple could simply shift the payment flow to developers and bypass the whole argument. It could but it isn't going to because its entire business model is built around controlling access to its mobile devices. The Illinois Brick Company sold bricks to companies building structures. Not much else happened.

The Supreme Court decision was blunt: "We decline to green-light monopolistic retailers to exploit their market position in that way. We refuse to rubber-stamp such a blatant evasion of statutory text and judicial precedent."

The dissent said that the direct-purchase argument "exalts form over substance. Instead of focusing on the traditional proximate cause question where the alleged overcharge is first (and thus surely) felt, the Court's test turns on who happens to be in privity of contract with whom."

In a statement to the media, Apple's spokespeople said: "Today's decision means plaintiffs can proceed with their case in district court. We’re confident we will prevail when the facts are presented and that the App Store is not a monopoly by any metric.

"Developers have a number of platforms to choose from to deliver their software — from other apps stores, to Smart TVs to gaming consoles — and we work hard every day to make our store is the best, safest and most competitive in the world."

Next page: What's next?
Page:
Tips and corrections
50 Comments