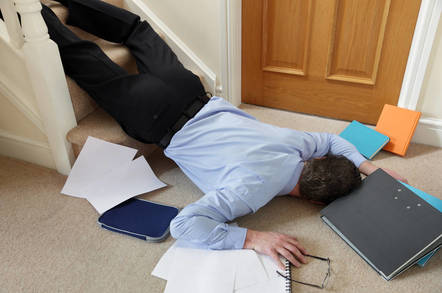 A GPS tracker used by elderly people and young kids has a security hole that could allow others to track and secretly record their wearers.

The white-label product is manufactured in China and then rebadged and rebranded by a range of companies in the UK, US, Australia and elsewhere including Pebbell 2, OwnFone and SureSafeGo. Over 10,000 people in the UK use the devices.

It has an in-built SIM card that it used to pinpoint the location of the user, as well as provide hands-free communications through a speaker and mic. As such it is most commonly used by elderly people in case of a fall and on children whose parents want to be able to know where they are and contact them if necessary.

But researchers at Fidus Information Security discovered, and revealed on Friday, that the system has a dangerous flaw: you can send a text message to the SIM and force it to reset. From there, a remote attacker can cause the device to reveal its location, in real time, as well as secretly turn on the microphone.

The flaw also enables a third party to turn on and off all the key features of the products such as emergency contacts, fall detection, motion detection and a user-assigned PIN. In other words, a critical safety device can be completely disabled by anybody in the world through a text message.

The flaw was introduced in an update to the product: originally the portable fob communicated with a base station that was plugged into a phone line: an approach that provided no clear attack route. But in order to expand its range and usefulness, the SIM card was added so it was not reliant on a base station and would work over the mobile network.

The problem arises from the fact that the Chinese manufacturer built in a PIN to the device so it would be locked to the telephone number programmed into the device. Which is fine, except the PIN was disabled by default and the PIN is currently not needed to reboot or reset the device.

And so it is possible to send a reset command to the device – if you know its SIM telephone number – and restore it to factory settings. At that point, the device is wide open and doesn't need the PIN to make changes to the other functions. Which all amounts to remote access.

But how would you find out the device's number? Well, the researchers got hold of one such device and its number and then ran a script where they sent messages to thousands of similar numbers to see if they hit anything.

They did. "Out of the 2,500 messages we sent, we got responses from 175 devices (7 per cent)," they wrote. "So this is 175 devices being used at the time of writing as an aid for vulnerable people; all identified at a minimal cost. The potential for harm is massive, and in less than a couple of hours, we could interact with 175 of these devices!"

The good news is that it is easy to fix: in new devices. You would simply add a unique code to each device and require it be used to reset the device. And you could limit the device to only receive calls or texts from a list of approved contacts.

But in the devices already on the market, the fix is not so easy: even by using the default PIN to lock it down, the ability to reset the device is still possible because it doesn't require the PIN to be entered. The researchers say they have contacted the companies that use the device "to help them understand the risks posed by our findings" and say that they are "looking into and are actively recalling devices." But it also notes that some have not responded.

In short, poor design and the lack of a decent security audit prior to putting the updated product on the market has turned what is supposed to provide peace of mind into a potential stalking and listening nightmare. ®