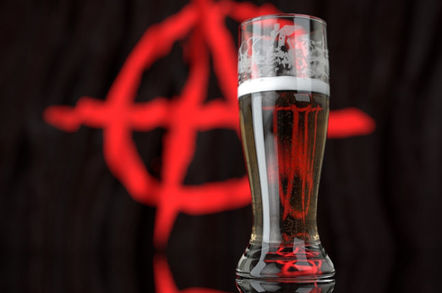 The fruit beer is flavoured with hibiscus and prickly pear, according to RatemyBeer – reason enough for legal action, we reckon. The 6 per cent brew gets a 3.1 out 5 by users of the site.

It seems like Oskar Blues Brewery has promptly removed any mention of the beer from their website but given the amount of animation and carousel images, it might still be there somewhere. You can find it if you look hard enough and cached images show a can with an uncanny resemblance to the Guns N' Roses' font and logo.

Welcome to the jumbo: Axl Rose tries to take a bite out of 'Fat Axl' internet meme

A complaint filed yesterday (PDF) at a California district court claims the band asked the Colorado brewery informally to stop selling the suds back in December, but it refused. This followed an attempt in August by the brewery to register Guns N' Rosé as a trademark and beer name.

But the filing starts to lose the reader's sympathy when it warns the court of danger to the band's merchandise.

The filing states: "This includes, but is not limited [to], clothing and related accessories such as t-shirts, hats, patches, stickers, buttons, and bandannas – an item uniquely associated with GNR and their co-founder and lead singer Axl Rose, who has famously worn bandannas for decades. This also includes items used for and related to the imbibing of alcohol including wine glasses, pint glasses, beer 'koozies' (sleeves used to keep beer cans cold), and shot glasses."

The filing seems to be almost as cross that the brewery was also selling a Guns N' Rosé bandanna as it was about the beer.

As a result, the filing says the band "suffered and continues to suffer and/or is likely to suffer damage to their trademarks, trade name, business reputation, and goodwill". It is seeking damages and attorney fees.

The band reformed in 2016 and continue to tour.

We've tried to contact the brewery and will update if we hear back. ®

Welcome to the jumbo: Axl Rose tries to take a bite out of 'Fat Axl' internet meme

Take you down to the bakery city, where the pies have cream and the cakes are tasty

Welcome to the courtroom

Axl Rose may have undermined own case over Dr Pepper stunt

Activision rolled for too much avatar rock