Also: NASA's 2024 Moon dreams get another soaking from the big bucket of reality 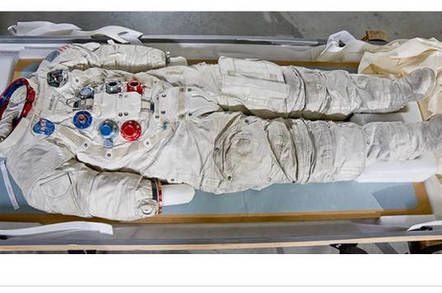 They don't make 'em like they used to. Or at all.

Roundup SpaceX moved on from the exploding Crew Dragon and Rocket Lab celebrated a fifth launch last week while NASA's five-year Moon plan looked in ever more danger of unravelling.

NASA spent the last week tying itself in knots as observers rightly challenged the agency for details as to how exactly it was going to put boots on the lunar surface once more.

Those old Apollo flags will be quite faded by now, and NASA has been tasked with getting back to the Moon before the end of US president Donald Trump's second term 2024.

There are many problems that NASA needs to overcome. Not least the need to develop a lunar lander pretty much from scratch. PowerPoints and slick animations from the Constellation programme don't count and, sadly, simply dusting off old Apollo hardware is not really an option.

Before landing, astronauts need to get to the Moon, which is where NASA's monster rocket (replete with monster delays) comes in. Administrator Jim Bridenstine threatened managers with the spectre of using a commercial booster, which unsurprisingly led to the SLS team finding schedule savings that could bring timelines in a bit.

But it is looking increasingly unlikely that the SLS will fly in 2020 as calls grow to keep the "Green Run", which is a full test of the new Core Stage of the SLS rather than a simple checking out the old Space Shuttle Main Engines, put in place prior to shipment of the hardware to NASA's Florida launch complex.

Of course, that is just one of the many hurdles faced by NASA as it prepares to ask for a budgetary handout in order to stand a chance of hitting the ambitious goal.

The other problem, as demonstrated by the embarrassing all-female spacewalk snafu, is that the agency doesn't even have enough spacesuits.

While NASA bravely insisted that astros fortunate enough to be aboard Moon Trump 1 will have something to wear when they arrive on the regolith via the usual medium of a slightly iffy-looking render, the team over at SpaceRef.com dug out a report that scorned the agency's efforts.

What will astronauts wear on moonwalks in 5 years? We're currently working on options for our #Moon2024 mission + beyond. We'll have a transition suit for 1st mission + modern spacesuit designs for astronauts to explore the lunar surface & help create our sustainable lunar future pic.twitter.com/HhDyvIC1L1

The report (PDF), published two years ago by watchdog the NASA Office of Inspector General Office of Audits, paints a damning picture of the state of spacesuits.

The existing units, with a 15-year design life, were developed over 40 years ago and despite spanking the best part of $200m on next-generation replacements, the report states that "the Agency remains years away from having a flight-ready spacesuit".

Still, the SLS team bravely insisted it was making progress with the rocket at least, thanks to a revolutionary new tool, which looked suspiciously like some extra work platforms, while Bridenstine revealed that rather than joining the Star Wars or Star Trek camps, he preferred SpaceBalls.

We'd suggest he takes a look at Iron Sky, in which astronauts are sent to the Moon in order to boost the popularity of a US president.

SpaceX's Dragon finally ended its affair with the ground following some robot shenanigans by NASA's ground controllers. The earthbound team used the station's Canadarm2 and the jumped-up multi-tool Dextre to swap out a failed Main Bus Switching Unit without requiring astronauts to venture out of the outpost.

However, even with the International Space Station (ISS) back to full power, the launch was delayed a further day as engineers repaired an electrical issue on the drone ship on which the spent Falcon 9 booster was to land. While SpaceX might have proceeded regardless in the past, recovering the first stage for reuse is becoming more important.

The company's onshore Landing Zone 1 remains out of action following the explosive failure of a Crew Dragon during testing.

Hans Koenigsmann, VP of Mission Assurance of SpaceX (and also likely on the shouty end of Musk's cattle prod), explained in a press briefing that things went south just before the SuperDracos were to be fired, and "the vehicle was destroyed."

The gang is still trying to work out what happened.

The cargo version of the Dragon, on its second mission to the ISS, performed admirably, finally getting off the ground at 02:48 EDT on 4 May and reaching the ISS to be grappled and berthed at 09:32 EDT on 6 May.

The booster returned successfully to the drone ship and is likely to see service again launching the CRS-18 ISS resupply mission in July.

Also running late due to gremlins with the payload, the Rocket Lab team launched another Electron rocket from its New Zealand launch complex, marking 28 satellites sent to orbit by the upstart outfit.

Three satellites, weighing in at a total of 180kg, were aboard the rocket, marking the heaviest payload to date to be pushed to orbit by the booster.

The mission was for the US Department of Defense and lifted off at 06:00 UTC on Sunday 5 May. It was a mere five weeks since the company's last orbital launch and was the first time Rocket Lab had lit the blue touchpaper at night.

The launch is the second of 2019 and the fifth consecutive success. The company has big plans and reckons it will get to a cadence of launching once every two weeks by the end of year. As it stands, its manifest for the rest of the 2019 calls for monthly launches, which will be challenging enough to accomplish. ®