The OpenStack Foundation would like everyone to just get along and play nice, m'kay? 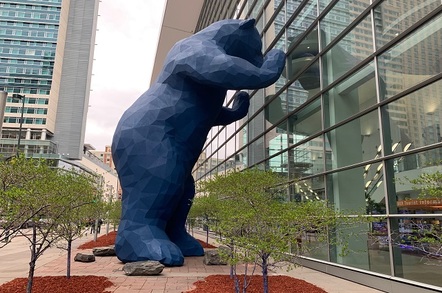 OpenStack executive director Jonathan Bryce took to the stage of the open source outfit's shindig in Denver, Colorado this week with a message of collaboration, openness and... clowns.

Around 2,000 fans of the technology had gathered in the cavernous Colorado Convention Center to either listen to the emissions from the OpenStack Foundation (OSF) or shelter from the sudden return to winter in the mile-high city.

Bryce took the audience at the newly renamed Open Infrastructure Summit on a whimsical trip down his own personal memory lane, which ended up, unsurprisingly, with his time at Rackspace and OpenStack, but started with his dream of becoming a rodeo clown.

He later told The Register that, alas, he no longer possessed the outfit. Someone more unkind than us might wonder if those clowns were still running the show at Rackspace after the ups and downs over the years.

A cynic, on the other hand, would wonder how the OSF would find time for any exciting announcements among the whimsy.

For his part, Bryce continued to proselytise the ethos of the OSF: "Open source is not a marketing initiative, and it's not a business model on its own. It's really an innovation philosophy."

"Innovation philosophy" does not, however, pay the bills. Bryce acknowledged this by pointing to the hundreds of companies, not just public cloud vendors, using the software to improve and enhance services, something a later speaker, Verizon Media's James Penick, would echo.

Penick, who was keen to plug the OSF's bare metal technology, Ironic (to which his employer had shunted over 4 million cores of infrastructure), went along with the collaborative kumbaya-ing, telling the audience he goes to bed knowing that somewhere in the world, someone is working on tech that will benefit his infrastructure. And in the morning his developers return the favour.

In a later round table event (where there were actually many round-tables – perhaps a metaphor for the OSF's expanding collection of projects), the gang tried to explain the focus on Ironic was to let people know the bare metal tech was in production and "just working." There were, said the OSF's Chief Operating Officer Mark Collier, "no snappy headlines."

Headlines aside, the keynote team found time for an awkward game of OSF Ironic "Whose Line Is It Anyway" as the duo of Team Leader Julia Kreger (from Red Hat and formerly IBM) and Program Manager Chris Hoge demonstrated the technology on a handy set of on-stage servers.

A brave thing to do live, and ultimately impressive as the hardware received the infrastructure required for Kubernetes. As the team observed: "Hardware is the fundamental layer for all abstractions."

It being OpenStack, the usual telco suspects were in attendance and AT&T were keen to sprinkle the fairy dust in the form of yet another 5G demo, with Ericsson taking care of some of the hardware duties.

If there had been any awkward squirming backstage when Bryce opened the event by thanking Huawei, such worries were gone as AT&T wheeled out a game equipped with a pair of "5G" emblazoned VR headsets to show off the speed of the tech.

Astute readers will have guessed by now that the demonstration had less to do with the forever-almost-here standard and more with smoke and mirrors.

We are starting to become concerned that telecoms companies truly do believe that simply writing "5G" on a thing makes it the latest and greatest thing ever.

Still, there was always the 5G Lounge to play with, right?

The "lounge" consisted of a couple of 5G radios bolted to the ceiling. Those then broadcast a signal nine metres down to a Netgear receiver, which spat Wi-Fi out to lucky conference goers.

Still, it's good to know that America is up there with China when it comes to over-promising on 5G demonstrations.

That a game simulating the latency difference between 3G, 4G and 5G should occupy time better spent on the altogether more exciting Kata Containers and Zuul made us a bit sad.

Collier told The Register that he reckoned 5G was "years away from widespread adoption" but emphasised that to ensure open source (in the form of OpenStack) plays its part "the work has to start now".

A question of Zuul

Collier and Bryce also responded to concerns that the original purpose of OpenStack was being blurred with the arrival of projects such as the Zuul CI/CD pipeline tool, with Bryce telling us that "OpenStack, as we know it, would not exist without Zuul."

Collier agreed, describing the decision to accept Zuul as a project as "somewhat of a unique circumstance" since it already existed within the community. The gang had tried a number of other CI/CD tools, but as Collier observed: "we were breaking them".

The OSF also addressed comments made by Canonical's Mark Shuttleworth during the keynote.

Shuttleworth had praised the work of the Foundation in overcoming siloed institutions, before warning that open source fans were no longer the Rebel outsiders, but were now very much becoming the Empire.

No one, said Shuttleworth, asked to replace duelling vendors with duelling foundations, before going on to say: "If a foundation will only represent the projects that it's paid to represent then is it really structuring an open agenda? Or is it just a fig leaf? And you don't need me to tell you that what's behind the fig leaf might be a little ugly."

Bryce and Collier were slightly bemused by Shuttleworth's remarks, pointing out the OSF was all about "collaboration without boundaries" and cheerfully included the likes of Kubernetes, Firecracker and Rust-vmm in its presentations.

Boris Renski, of OpenStack contributor Mirantis, was a little blunter, telling us that "whereas the OpenStack Foundation is really trying to build bridges" other open source groups were considerably more prickly.

For his part, Shuttleworth had praise for the OSF in a later interview with The Reg, saying the Foundation was indeed "trying really hard" before pointing out that as the projects had matured "we've got to the real disputes between the open source guys in the clouds, we're still figuring this stuff out."

However, Shuttleworth, worried at what he percieved as vendor-like behaviour, still felt he had to provide some commentary and let the comunity decide what it wanted to do with it.

While Canonical rounded out the keynote, rivals Red Hat were conspicuous by their absence. Representatives grumbled to The Reg that "you have to be on a particular level of sponsorship to be presenting" and that anyway, Red Hat engineers could be found participating in OpenStack projects.

Or maybe the Big Blue monster lurking outside had sent them scurrying for their booth. ®