Engineers knew of problem in 2017. Management didn't until after fatal crash 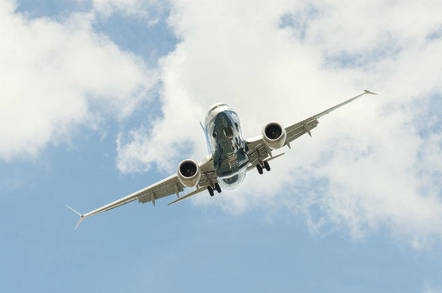 As the 737 Max scandal rolls on, "software delivered to Boeing" has been blamed by the company for the malfunctioning of a safety display.

In a statement issued over the weekend, the American airliner manufacturer admitted that its software was not properly displaying fleet-standard warning captions to pilots. This admission comes after sustained media reporting over cockpit angle-of-attack (AOA) displays and warnings, one of which was sold by Boeing to airlines as an optional extra for their aircraft.

Warning captions (wording that flashes up on the pilot's display screen) on the 737 Max included one, AOA Disagree, which alerted the pilots if the 737 Max's two AOA sensors were delivering different readings from each other. If the two go out of sync, the logic goes, one must therefore be faulty.

Worse, Boeing engineers knew about the problem in 2017 – months before the fatal Lion Air and Ethiopian Airways crashes. The company only revealed this to US Federal Aviation Authority regulators after Lion Air flight JT610 crashed in October 2018, claiming in this week's statement that "the issue did not adversely impact airplane safety or operation".

"Senior company leadership was not involved in the review and first became aware of this issue in the aftermath of the Lion Air accident," added Boeing.

The AOA sensors feed the controversial MCAS trim system, another software feature that did not work properly. Improper MCAS activations seemingly caused by faulty AOA readings are suspected to have contributed to two fatal Boeing 737 Max crashes within the last year, costing hundreds of lives.

"Accordingly," continued Boeing, "the software activated the AOA Disagree alert only if an airline opted for the AOA indicator."

This was not what should have happened. Even if an airline didn't pay extra for the AOA indicator display gauge (pictured here on a schematic for earlier 737 versions than the Max), if the sensors went out of sync, a warning should have been shown to the pilots.