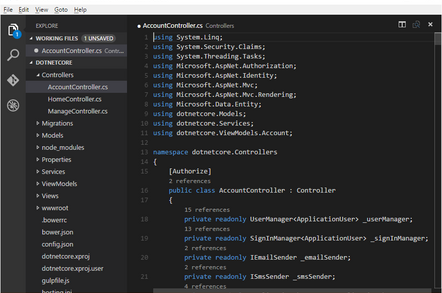 Now imagine this in a browser window...

Build At its Build conference in Seattle on Monday Microsoft highlighted a handful of enhancements to its developer portfolio, including a preview of a pending browser-based development environment called Visual Studio Online (VSO).

VSO is distinct from Visual Studio 2019 (VS), Redmond's full-featured integrated development environment for macOS and Windows, and Visual Studio Code (VSC), its lightweight source-code editor for Linux, macOS and Windows. VSO also differs from the fully-managed cloud development environments Microsoft offers through its Azure platform, though it will connect to hosted code spaces.

VSO, as Microsoft principal program manager Jonathan Carter explains in a blog post, is "a new web-based companion editor that compliments [sic] the Visual Studio family, and ensures you can work effectively from any device."

It's more or less VSC stripped of the Electron shell that makes it a freestanding application and shoehorned into a browser. VSO allows developers to connect to remotely hosted development environments and interact with source code files. It even supports IntelliCode and Live Share. Or it will be once they are available.

Scott Hanselman, Microsoft partner program manager, demonstrated the browser-based Visual Studio companion using an iPad Pro on stage during Microsoft's cloud and AI EVP Scott Guthrie's Build keynote. But you can't have it yet. Right now, VSO is in private preview, meaning you can sign up online and wait for an emailed invitation to try out the work-in-progress.

"Visual Studio Online, it uses the same Monaco technology that's leveraged by many teams at Microsoft, including Azure DevOps, OneDrive, and Visual Studio Code," a Microsoft spokesperson told Richard Speed, El Reg's reporter at Build. "However, Monaco itself is not a product."

VSO isn't a product either. Not yet. It's more of a recurring dream. Veteran developers may experience a sense of deja vu because Microsoft also introduced Visual Studio Online in 2013, with its Monaco code editing tech, no less.

In related news, Microsoft decided to skip the number four by following its .NET Core 3.0 development platform, slated to ship in September, with .NET 5, planned for November 2020.

"We’re skipping the version 4 because it would confuse users [who] are familiar with the .NET Framework, which has been using the 4.x series for a long time," said .NET program manager Richard Lander in a blog post. "Additionally, we wanted to clearly communicate that .NET 5 is the future for the .NET platform."

Coming next year, .NET 5 aims to provide a unified .NET runtime and framework that works similarly across supported platforms and exhibits consistent behavior. It will incorporate Xamarin's Mono runtime and CoreCLR as interchangeable components to make it easier to select different runtime options. It provides developers with the ability to target code for Windows, Linux, macOS, iOS, Android, tvOS, watchOS and WebAssembly.

Also, GitHub, now a part of Microsoft, has implemented a way to sync groups across Azure Active Directory (Azure AD) and GitHub teams.

The benefit for organizations that use both Microsoft and GitHub is that administration tasks like setting permissions become a bit easier.

"You’ll be able to assign one or more Azure AD groups to a team within GitHub and automatically keep membership synchronized in one, up-to-date place," said GitHub Enterprise product manager Mario Rodriguez in a blog post. "In addition to speeding up administration, having just one place to manage users helps strengthen security and audit compliance." ®