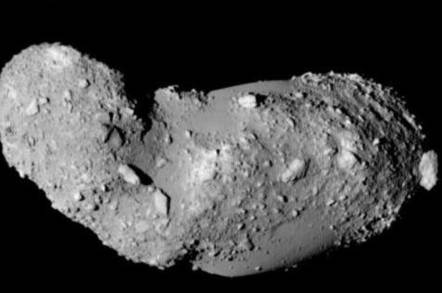 A pair of astronomers have managed to find water in an asteroid sample mined from the rocky remnant Itokawa, a type of asteroid previously thought to be bone dry.

JAXA, the Japanese space agency, paid Itokawa a visit with its Hayabusa probe in 2005. The kidney bean shaped asteroid measures 1,800 feet long and 700 to 1,000 feet wide. It completes an orbit around the Sun every 18 months at an average distance of 1.3 times the Earth-Sun distance of 93 million miles.

Hayabusa fired tiny missiles at Itokawa's surface to kick up samples of space rock dust to transport to Earth. Five years later, the probe returned back to our planet with its cosmic plunder. Five of these collected particles, measuring about half the thickness of a human hair, were given to researchers at Arizona State University (ASU) in the US. They proceeded to analyse the dust for signs of water.

It’s a strange move considering Itokawa is classified as an s-type or stony asteroid. These types of rocks reside in the inner neighborhood of the Solar System, and consist of silicate materials and nickel-iron, previously believed to be devoid of water. The experiment seems to have paid off, however, as the cosmochemists found signs that the rock does indeed contain water after all.

"We found the samples we examined were enriched in water compared to the average for inner solar system objects," said Ziliang Jin, first author of the paper published in Science Advances and a postdoctoral scholar at ASU, this week. The results reignite the idea that asteroids could have delivered half of the water on Earth as they smashed into our home world's rocky surface.

In two out of the five samples, the researchers found the mineral pyroxene. These types of minerals have water molecules in their crystal structure. By measuring the amounts in the samples, the researchers estimated that Itokawa’s mass originally contained somewhere from 698 to 988 parts per million (ppm) of water - with one part per million being one milligram of water per kilogram of Itokawa's mass. After they accounted for water loss from heating and other processes, it is estimated that the asteroid had about 160 to 510 ppm water.

"The particles we analyzed came from a part of Itokawa called the Muses Sea," said Maitrayee Bose, co-author of the paper and an assistant professor of Earth and Space Exploration at ASU. It's an area on the asteroid that's smooth and dust-covered."

Itokawa itself is a smaller fragment of a larger asteroid body measuring 12 miles wide. The original rock was heated between 1,000 and 1,500 degrees Fahrenheit, and broke apart at some point in time after colliding with another asteroid. Two pieces then fused together eight million years ago to become Itokawa.

"Although the samples were collected at the surface, we don't know where these grains were in the original parent body. But our best guess is that they were buried more than 100 meters deep within it," said Jin.