Investigation reveals shelves creaking under the weight of printed-out missives 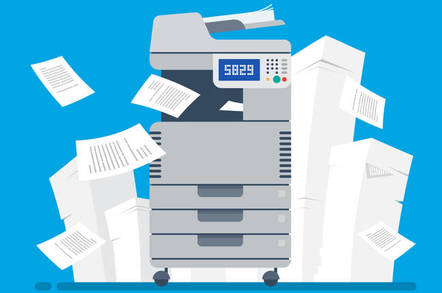 On Call All hail On Call, the beacon of light at the end of the long week's tunnel. Here, readers share their tech support triumphs and woes, from the infuriating to the fascinating, for your reading pleasure.

This time, we meet "Nico", who was faced with something of a PIBKAC situation when email was a slightly newer innovation, in the late '90s.

"I worked for a regional TV station based in Glasgow, providing 1st/2nd line support," he said.

One day, a ticket landed that was, as Nico put it, a "real head-scratcher".

The problem, reported by the PA to a senior exec, was that the emails her boss was sending didn't have "sent" dates on them.

The support team thought this was a bit odd, since time-stamping emails as they're sent is pretty basic.

"We just took it for granted that our email client would do this with no real issue," said Nico.

And so, he and a colleague set off to try to troubleshoot the problem on the ground.

"On arrival at the exec's office we were met by the boss and her PA, who were both looking decidedly unhappy and just itching to share their displeasure with 'the idiots from IT'," he said.

The tech support duo asked them for evidence of the problem – and were promptly handed a set of print-outs of emails that didn't have a timestamp on them.

"The PA explained that her boss 'didn't trust computers', so whenever the boss sent an email, she printed it out and her PA filed it."

At this point, Nico became painfully aware that the office had several shelves groaning under the weight of lever-arch files full of printed-out emails.

Sensing they could only deal with one ridiculous problem at a time, Nico left this to one side for the moment, and asked the boss to walk them through the process to identify the problem.

"The exec then sat at her desk, banged out a quick email, hit print and sat back triumphantly with her arms folded," said Nico.

"The PA picked up the email from the printer and brandished it in our faces, saying: 'See?! No date.'"

Nico had been watching the pantomime demonstration closely and innocently asked the boss why she hadn't pressed send on the mail.

"I'm sure the more savvy readers will have figured out the root cause of the problem, but it took us several minutes to explain (and have our valued users accept) that an email won't have a sent date/timestamp on it until it's actually sent."

He pointed out that typing and them printing them in anticipation of sending them at a later date would create "all kinds of problems" – not least that none of them would have a sent date.

"We left it to our management to address the whole printing thing for another day."

Have you ever come across this kind of attachment to producing hard copies? Tell us about your most memorable call-outs and we might feature it in a future column. ®