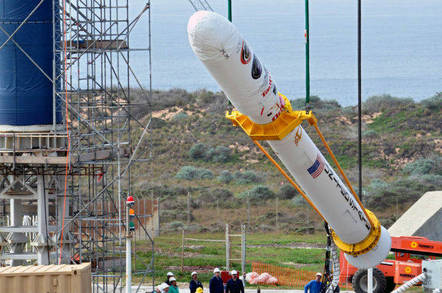 The Glory satellite within its fairing on a rocket, shortly before it took off ... and crashed into the south Pacific (Credit: NASA)

Scientists at NASA have accused one of their metal suppliers of lying about the strength of its aluminium in a 19-year scam that caused $700m in satellites and other parts to go up in smoke.

The space agency eggheads pointed the finger of blame at the aluminium manufacturer after probing two failed science missions: the February 24, 2009 fruitless launch of the Orbiting Carbon Observatory, and the March 4, 2011 doomed launch of the Glory satellite, designed for monitoring atmospheric pollutants.

In both cases, the rocket fairing, which is the nose cone protecting the satellite payload, failed to separate after liftoff. As a result, the Orbiting Carbon Observatory (OCO) plunged into the ocean off the Antarctic, and Glory swiftly crashed into the Pacific, after their rockets fell back to Earth, the satellites still attached.

The blunders were traced back to the fairing release mechanism, and specifically the aluminium (or aluminum in Freedom Language) used in this component. It was supplied by Sapa Profiles Inc, of Oregon, USA, now renamed Hydro Extrusion Portland, Inc. NASA's boffins said the metals used were not up to specification, and called in the Feds.

Subsequent checks appeared to show that Sapa had been falsifying its materials testing reports for profit. The metal was supposed to have a particular tensile strength, however, company employees fudged the tests to increase profit margins, investigators said.

“NASA relies on the integrity of our industry throughout the supply chain,” said Jim Norman, NASA’s director for Launch Services, earlier this week.

"While we do perform our own testing, NASA is not able to retest every single component. That is why we require and pay for certain components to be tested and certified by the supplier.

"When testing results are altered and certifications are provided falsely, missions fail. In our case, the Taurus XLs that failed for the OCO and Glory missions resulted in the loss of more than $700 million, and years of people’s scientific work. It is critical that we are able to trust our industry to produce, test and certify materials in accordance with the standards we require. In this case, our trust was severely violated."

The Feds said they uncovered thousands of falsified records relating to the breaking point of Sapa's metal. And it wasn't just NASA that got stiffed, we're told: the same plant supplied the US military and hundreds of other customers in America and around the world.

BONFIRE of the MEGA-BUCKS: $200m+ BURNED in SECONDS in Antares launch blast

The blame was specifically pinned on Dennis Balius, Sapa's testing lab supervisor. Prosecutors said he forced lab technicians to falsify testing results, recertify failed parts, and violate testing standards by speeding up examinations and using incorrect parts. He pleaded guilty to charges of fraud in July 2017, and was sentenced to three years in the cooler, and forced to pay over $170,000 in restitution.

In an out-of-court settlement, the company formerly known as Sapa agreed to pay $31.4m in restitution to NASA and the US military, and forfeit $1.8m in "ill-gotten gains," as the Dept of Justice put it. That ended a criminal fraud case against the biz.

To settle a related civil case, in which the manufacturer was accused of breaking the False Claims Act, the company agreed to pay $6m to NASA and $5m to the US Department of Defense’s Missile Defense Agency. It is also barred from selling to US government agencies in the future.

“Our partners at NASA and in the military – as well as hundreds of private businesses – put their faith in the integrity of this supplier and the structural integrity of its products,” said Special Agent in Charge Loren ‘Renn’ Cannon of the FBI’s Portland Field Office. “For almost two decades, this company’s greed violated that trust." ®