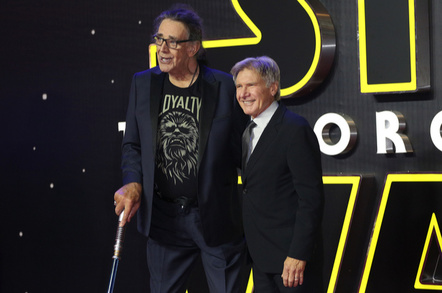 His family said in a statement: "The family of Peter Mayhew, with deep love and sadness, regrets to share the news that Peter has passed away. He left us the evening of April 30, 2019 with his family by his side in his North Texas home."

In response Mark Hamill tweeted: "He was the gentlest of giants-A big man with an even bigger heart who never failed to make me smile & a loyal friend who I loved dearly - I'm grateful for the memories we shared & I'm a better man for just having known him. Thanks Pete."

Mayhew's family said he put his heart and soul into the original Star Wars trilogy but that the "Star Wars family meant so much more to him than a role in a film".

The "big walking carpet", as Chewbacca was once branded by Carrie Fisher's character Princess Leia, also consulted on Star Wars: The Last Jedi to help his successor Joonas Suotamo learn the role.

Mayhew developed relationships with not just the cast and crew members but also fans of the films through his involvement with fan conventions around the world.

He established the Peter Mayhew Foundation which offered help to families and individuals in crisis and most recently provided food aid for children in Venezuela.

Mayhew was born in Barnes, London in 1944 and worked as a hospital orderly before turning to acting.

He is survived by his wife Angie and three children.

The family have asked people to consider donating to his foundation in his memory. ®

'IP addresses are never personal except when they are'

Bet you're shocked to hear that, aren't you?