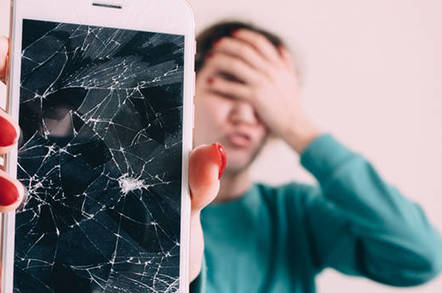 Analysis A Californian law that would give people the right to fix their own electronic devices has been pulled by its author less than two months after it was first proposed.

"While this was not an easy decision, it became clear that the bill would not have the support it needed today, and manufacturers had sown enough doubt with vague and unbacked claims of privacy and security concerns," Assemblymember Susan Talamantes Eggman said in a statement this week.

The legislation (AB 1163) was only introduced in the US state in March, and had the backing of a number of organizations included Consumer Reports, the Electronic Frontier Foundations (EFF) and Californians Against Waste.

But just as with a consumer-friendly data privacy bill last month, the proposed right-to-repair legislation was pulled at the last minute, on April 30. It was due to be discussed and voted on at a meeting of the Privacy and Consumer Protection Committee this week.

The logic behind pulling the bill, rather than allow it to be voted down, is so the bill can be amended and reintroduced at a later point in the legislative session. If it loses in a vote, it's pretty much game over.

However, when we asked Assemblymember Eggman's office what changes it imagined would make the bill more acceptable to a majority of committee members, we received no answer.

What is clear is that lobbyists from Big Tech and their associated industry bodies continue to call the shots in Sacramento, even when they provide questionable arguments.

In this case, a coalition of tech companies sent a letter [PDF] to committee chair Ed Chau in which they argued that allowing third parties to repair consumer devices would actually threaten consumer security and safety.

"One of our chief concerns with this legislation is its potential to weaken the privacy and security features of various electronic products," the letter read, adding: "With access to proprietary guides and tools, hackers can more easily circumvent security protections, harming not only the product owner but also everyone who shares their network."

What some see as the ability to fix issues with expensive equipment that they have bought without having to pay excessive fees to the manufacturer or an authorized third-party, those companies see as a security risk.

"We are concerned that mandating disclosure of sensitive proprietary tools and information may make device manufacturers an enticing target for malicious behavior," the letter argued. "Bad actors could seek to exploit compliance requirements for illegal purposes, such as circumventing digital locks protecting copyrighted content and/or making unauthorized modifications."

The same argument has been playing out for years across all kinds of electronic devices, and the manufacturers that benefit financially from it always have an explanation for why it is necessary. Such as phones that are locked to specific networks. Or phone numbers that can't be changed. Or laptop memory that can't be swapped out.

In this case, according to some reports, Apple and industry association went one step further and turned up with an iPhone at committee members' offices and claimed that allowing someone to open up an iPhone could cause them to hurt themselves because they might accidentally puncture the device's lithium-ion battery.

Amazingly, this argument appeared to hold water with elected representatives. As did the argument that the iPhone is "too complex" for people to repair (presumably in the same way that Donald Trump's tax returns are "too complex" for Congress to understand them which is why he won't release them.)

"Manufacturers want to ensure that their products are serviced by professionals who understand the software that operates their products and heave spent time procuring the knowledge necessary to safely repair and return it to the consumer without compromising those standards or undermining critical safety and security features," the letter went on.

Which sounds like a plausible argument until you consider the fact that the majority of adults drive metal bombs at enormous speeds around our roads and at any point could decide to stick a screwdriver in them. But they don't because they realize they don't know what they’re doing and so take it to a garage instead. In other words, society has already dealt with this one.

Tractors, not phones, will (maybe) get America a right-to-repair law at this rate: Bernie slams 'truly insane' situation

Super Cali optimistic right-to-repair's negotious, even though Apple thought it was something quite atrocious

A smartphone should be as fixable as a refrigerator

The DMCA wasn't meant to stop you fixing your car