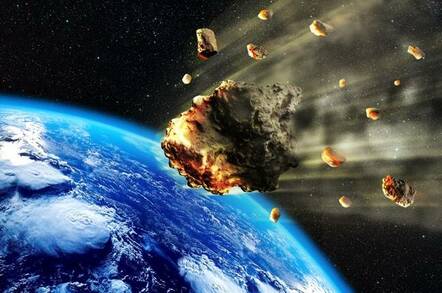 An asteroid bigger than the size of three football fields is hurtling towards Earth – and will pass so close to our planet, it'll be visible to the naked eye and may pass through the band of human satellites in geostationary orbit.

Before you all panic and start hoarding food, guns, and Mad Max-style clothing, it should be said that NASA's pretty sure the asteroid won't hit us, or at least that the probability of collision is very low. But the flyby, due on April 13, 2029, will give us an unprecedented opportunity to study the hunk of space rock so we can find out ways to divert them in the future.

The hefty chunk of space rock, classified as a near-Earth asteroid, measures 340 meters wide and scientists have named it 99942 Apophis. It was first discovered in 2004 by a team of astronomers working at the Kitt Peak National Observatory in Arizona, United States.

They only managed to observe it for two days, however, due to technical problems and poor weather conditions. The faraway visitor remained lost to astronomers until another group at the Siding Spring Observatory, Australia, caught a glimpse of it.

This time they were able to piece together its trajectory. Mild panic set in when they calculated that there was a 2.7 per cent chance that Apophis would smash into Earth. Luckily, those figures have been revised and scientists now believe it’ll be plain sailing as it approaches Earth.

It’s expected to pass 31,000 kilometers or 19,000 miles above our planet, leaving Earth unscathed. Instead, astronomers are now very giddy over the prospect of a nearby giant asteroid whooshing by. Afterall, the event offers a rare chance to cosy up to a giant asteroid so closely.

Scientists are already gearing up for the spectacle. At the 2019 Planetary Defense Conference held in Maryland, they gathered round to discuss how best to observe it and what type of missions could be conducted to study the phenomena.

“The Apophis close approach in 2029 will be an incredible opportunity for science," said Marina Brozović, a radar scientist at NASA's Jet Propulsion Laboratory (JPL) earlier this week. "We'll observe the asteroid with both optical and radar telescopes. With radar observations, we might be able to see surface details that are only a few meters in size."

The universe speaks: 'It's time to get off your rock!'

As it whooshes by, it’ll be visible to the naked eye. Apophis will first appear as a light streaking across the night sky in the Southern Hemisphere, travelling from the east coast to the west coast of Australia.

After a few hours, it’ll whizz pass the Indian Ocean and will have crossed the equator by the afternoon in eastern US time. Next, it’ll continue flying west thundering past Africa.

The time of closest approach will be just before 1800 EDT (2200 GMT), where it’ll be moving above the Atlantic Ocean. Apophis is travelling at breakneck speeds, and will cross the second largest ocean in a single hour.

"We already know that the close encounter with Earth will change Apophis' orbit, but our models also show the close approach could change the way this asteroid spins, and it is possible that there will be some surface changes, like small avalanches," said Davide Farnocchia, an astronomer studying near-Earth asteroids at NASA’s JPL.

Apophis is part of another group of about 2,000 known asteroids classed as Potentially Hazardous Asteroids. "By observing Apophis during its 2029 flyby, we will gain important scientific knowledge that could one day be used for planetary defense," Paul Chodas, director of NASA’s Center for Near Earth Objects Studies, concluded. ®