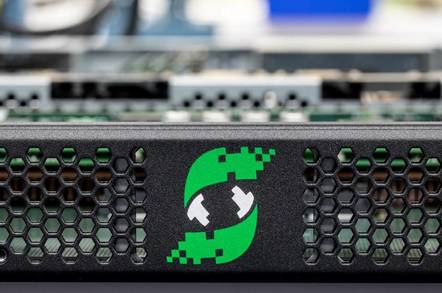 Open-source storage enthusiasts at SoftIron are touting a hybrid storage array that combines a bunch of HDDs and SSDs with Arm64-compatible Seattle system-on-chips from AMD and free Ceph software.

The HyperDrive Density+ packs a tiered storage architecture – which automatically moves ‘hot’ data to SSDs and ‘cold’ rarely accessed data to HDDs – into a single rack unit. In theory, the system should deliver a level of performance that’s close to all-flash arrays, at a much lower price point.

It comes in two varieties: HD22078 features 72TB worth of hard drives and 6TB of SSDs, while HD22168 offers 120TB of spinning rust and 48TB of SSDs. Besides the storage media mix, the two are identical. In comparison, SoftIron’s previous Density model – lacking the ‘plus’ – was limited to a measly 960GB of flash.

As is the fashion, the arrays are available with pay-as-you-go, subscription-style pricing, and the ability to cancel the contract at any time.

"Currently if you have a situation where you need high-performance drives for one data set and cost-effective storage for another set of data, you're pretty restricted and really only have two available options,” said Tim Massey, SoftIron's CEO.

AMD's 64-bit ARM server chip Seattle finally flies the coop ... but where will it call home?

“You either deploy two different Ceph clusters, one for each data set or, you deploy one Ceph cluster with enough of each drive type to be able to handle redundancy, which is typically triple replicated.

“As you can imagine, these are very complicated and expensive solutions that are not serving the enterprise in the least. HyperDrive Density+ solves this problem by combining performance and internal flash tiering into a single, 1U Ceph appliance."

Ceph is a free software platform that supports block, object and file storage. Designed to run on clusters of commodity servers, it offers a software-defined storage backend at virtually no cost, complete with replication and snapshot functionality. Vendors with their own distributions of Ceph include Red Hat and SUSE – but neither makes dedicated hardware.

SoftIron is headquartered in London, England, and has been developing products based on Ceph since 2012. The company is proud of the tight integration between Ceph and the underlying hardware, and is using 64-bit Arm-compatible "Seattle" Opteron A1100 chips from AMD – since storage servers don’t require tons of compute, but benefit from low CPU power consumption (and the resulting drop in internal server temperatures) and rich IO options.

All of SoftIron servers are made in the US.

In March, the company launched a trio of products including the Hyperdrive Storage Manager – a management node equipped with software designed to enhance Ceph with features valued by enterprise users, like an actual graphical user interface. The software can be used to, ahem, drive all the HyperDrive nodes, including the latest box. ®