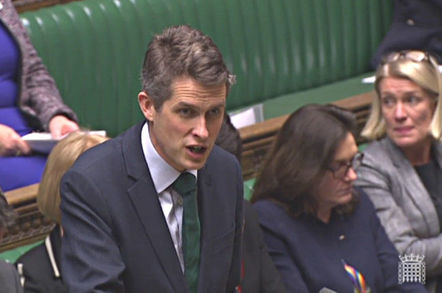 Updated Defence Secretary Gavin Williamson has been sacked from the British government after apparently leaking the news that Blighty isn’t completely banning Huawei from its 5G networks.

Williamson is accused of being the source for a Daily Telegraph front-page story stating that the National Security Council, made up of senior Cabinet ministers, had decided to allow Huawei to supply equipment for the edge – but not the core – of the UK’s future 5G networks.

The actual leak of the decision, on the same day that the decision was made, was of little interest to anyone outside the Westminster political bubble. Though Prime Minister Theresa May had made noises about a leak inquiry, nobody believed that her dead-duck premiership would actually follow it through, or have the teeth to score any sackings.

The prime minister has this evening asked Gavin Williamson to leave the government, having lost confidence in his ability to serve in the role of defence secretary and as a member of her cabinet.

The prime minister’s decision has been informed by his conduct surrounding an investigation into the circumstances of the unauthorised disclosure of information from a meeting of the National Security Council.

“It is vital for the operation of good government and for the UK’s national interest in some of the most sensitive and important areas that the members of the NSC – from our Armed Forces, our Security and Intelligence Agencies, and the most senior level of Government – are able to have frank and detailed discussions in full confidence that the advice and analysis provided is not discussed or divulged beyond that trusted environment,” May wrote to Williamson, in a letter published by the Guardian newspaper on Wednesday.

Senior people from the National Cyber Security Council refused to comment on the leak when The Register asked them about it last week at their annual Cyber UK shindig in Glasgow.

Ironically, the “leak” more or less shows that Britain is keeping its Huawei status quo, allowing the Chinese company’s products in the edge but not in the sensitive core of the network, where any potential spying could have a far bigger impact than knowing certain people connected to a mobile mast at a certain time.

The sacking of a senior Cabinet minister, and one tipped as a potential successor to May, will inevitably push the Huawei security kerfuffle back into the public eye just as it seemed to be dying down.

In political terms, the Ministry of Defence will miss Williamson greatly. Compared to his staid and boring predecessor, Michael Fallon, Williamson managed to secure increases (however small) in the defence budget and put the department back on the political and media map with his occasionally zany announcements.

As this story was being written it emerged that Williamson's replacement is Penny Mordaunt MP, who, as well as having once been a defence minister, was also a commissioned officer in the Royal Naval Reserve. ®

Williamson has written back to May to "strenuously deny that I was in any way involved in this leak and I am confident that a thorough and formal inquiry would have vindicated my position."

He went on to say he was axed after refusing to quit, telling the PM: "I appreciate you offering me the option to resign, but to resign would have been to accept that I, my civil servants, my military advisers or my staff were responsible: this was not the case."

The now-former Defence Secretary believes his dismissal was politically motivated, and the result of a falling out between himself and Cabinet Secretary Mark Sedwill. All of which has nowt to do with calls for a criminal investigation into whichever person leaked the info.