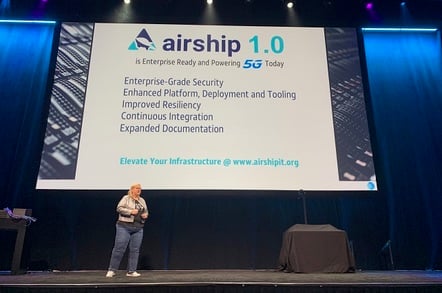 The OpenStack Foundation took advantage of its Denver shindig to emit version 1.0 of Airship, a collection of open source tools aimed at simplifying building cloud systems.

The Airship project was slipped into the OpenStack big bag o'toys in 2018, with the initial code contributed by AT&T, South Korea Telecom (SKT) and Intel.

Its main objective is to make cloud provisioning declarative rather than having administrators fiddle with dozens of individual components, with all the configuration and lifecycle management pain that entails.

This, of course, means YAML all round, with everything, including network configuration and bare metal hosts through to helm charts, going into the document. Airship then implements the configuration, bringing up the necessary infrastructure.

The theory is that one workflow can serve for all aspects of lifecycle management, with few differences between interacting with a new deployment versus updating an existing one.

Of course, it wouldn’t be OpenStack without there being a good few sub projects to make the magic happen, and Airship is no exception. It also makes use of several other open source projects, some from OpenStack and some not. The list includes OpenStack-Helm to get OpenStack and its services on Kubernetes, as well as the orchestration tech itself and the likes of OpenStack’s own Ironic in order to provision at bare metal level.

Airship's own sub-projects (replete with groan-inducing names) include the documentation project "Treasure Map", the Python REST orchestrator "Drydock", "Deckhand" a storage service for those YAML configuration documents and the wonderfully named "Pegleg" - an aggregator that provides early linting and validations via Deckhand for documents that can be consumed by Airship.

The jaunty nautical theme continues with "Armada", a tool for managing multiple Helm charts, "Promenade" for bootstrapping a resilient Docker and Kubernetes cluster, "Berth" as a minimal VM for Kubernetes and so on.

A release candidate of Airship version 1.0 made an appearance in November 2018 and the likes of AT&T and SKT already have the system in production, with the former using the tech as part of its 5G roll-out. The brave were also invited to kick the tyres in the form of "Airship in a Bottle", which lead to today's release.

The Airship community has grown over the last year, with 137 contributors from 17 companies across the world, OpenStack said. One of those contributors is SUSE, who is using the technology for lifecycle management and plans to make it part of a technical preview of a containerised OpenStack, due in the summer.

Matthew Johns, product and solutions marketing manager for SUSE, explained that the goal of the project was "to make it easier for enterprises to deliver highly available OpenStack environments".

While the Airship gang points to a range of applications for the tech, using it to manage the notoriously tricky to deploy and maintain OpenStack IaaS platform by simply tinkering with a YAML file certainly has appeal. ®