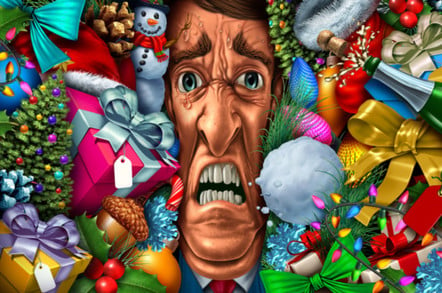 Who, Me? Welcome once more to Who, Me? your weekly shot in the arm with other readers' ugly tales of lost jobs and catastrophic cockups.

This week, we meet "Trevor", who tells us about a time an over-egged CV got him, and his firm, in a spot of bother over the festive season.

Trevor was working for an outsourcer in Dublin and was lent to one of the firm’s clients to help them configure their new Exchange server.

“I had embellished my CV somewhat when applying for the post, and suggested I held an MCSE encompassing configuration of exchange…” he said.

But everything went fine, and Trevor and client's email admin got their work done remarkably fast.

"I phoned my manager and reported our morning's work," he said. "I was requested to come back to base and do the same with a new exchange server that had been bought for our site.”

And so Trevor and his colleague set about replicating their morning’s work at the other site, which took about 90 minutes less than it had the first time round.

“We sent a few test emails, and buggered off for the Christmas break,” he said.

Trevor was abroad visiting his parents on Boxing Day when their home phone started ringing – his manager had somehow managed to track down the number. Which could only mean one thing.

“Mayhem had broken out,” Trevor said. “My manager had set an out-of-office message on his email, locked the doors and gone home to his family for Christmas.”

Meanwhile, the client email admin had also set an out-of-office response and was about to leave – but then decided to stay back for a few minutes to send the manager a brief account of the work.

“He then immediately shutdown his computer and went home.”

Well, you can guess what happened next. Trevor and his colleague had misconfigured both the servers, which proceeded to ping-pong out-of-office messages between the two accounts.

Eventually, the server filled its hard-drive, Trevor said, at which point storage for his firm failed over to New York, and for the client, to Geneva.

But it didn’t stop there.

“We managed to fill those servers too, and were about to fail over to India and Singapore, before someone put two and two together called a halt to proceedings.”

Trevor was back in Ireland the following day, walking his colleagues through a clean up and a three-minute config change to both servers, before they were allowed back online.

“I immediately started exploring my options elsewhere,” said Trevor. But there is a happy ending, because he added that he was “thrilled to escape the outsourcing hell that came very shortly thereafter”.

However, he did learn never to embellish his CV again.

When was the last time you sexed up a CV? Did it work out – or did you end up having to look for a new job? Tell Who, Me? all about your worst technical mishaps and it might feature in a future column. ®